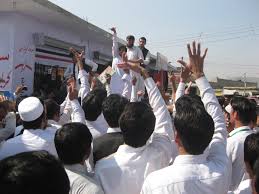 JAMRUD, 9 December: The students of Khyber Agency on Thursday staged a protest demonstration and took out rally from Jamrud Press Club to Bab-e-Khyber over stoppage of their scholarships and other funds.

The Muttahida Tulaba Mahaz leader Abdul Qadir said while addressing the rally that the scholarships of poor FATA students have been stopped due to which they are facing difficulties in continuing their education. He said the political administration spent the students funds on sports and other activities, but they have no concern over the education of the students.

Abdul Qadir said several applications were sent to the political administration in this regard, but it did not respond. He demanded Khyber Pakhtunkhwa Governor Iqbal Zafar Jhagra to restore the scholarship for tribal students. He said the admission fee of FATA students should also be reduced.

The protesters threatened to block the Pak-Afghan Highway if their demands were not fulfilled.