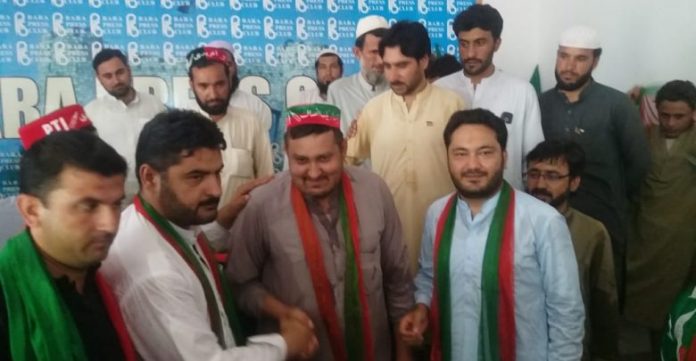 BARA: The Khyber Union Akakhel unit former president Wasim Afridi along with friends has announced to join the Pakistan Tehreek-e-Insaf (PTI) ahead of the provincial polls in tribal districts.

Addressing a press conference at Bara Press Club on Friday, Wasim Afridi said he was associated with Khyber Union for the last 10 years as political activist and worked selflessly for the betterment of the people of the area. He said he was extremely disappointed when some people in the Khyber Union started to ignite regional and linguistic prejudices for their political gains. He said Akakhel tribe was perturbed over this attitude due to which he parted his ways with the Khyber Union.

Wasim Afridi said the PTI Chairman Imran Khan is a well-wisher of tribal people. He said Prime Minister Imran Khan is committed to serve the people of tribal districts and address their sense of deprivation.

Zubair Afridi said on the occasion that he is thankful to all the new entrants to the party. He urged the masses to select those candidates in the upcoming provincial elections in tribal districts who can serve them better. He claimed that the PTI will serve the tribal people better. He presented the party caps to the new entrants and welcomed them into the party.

Elections on 16 general seats of tribal districts in Khyber Pakhtunkhwa Assembly are scheduled to be held on July 20. Elections were originally scheduled on July 2, but the exercise was delayed to July 20 by the Election Commission of Pakistan after receiving an application from the KP government in this regard.

A tough competition is expected among the candidates of the ruling PTI, Pakistan People’s Party (PPP), Jamiat Ulema-e-Islam-Fazl (JUI-F), Jamaat-e-Islami (JI) and Awami National Party (ANP). Some independent candidates are also in the field to try their luck and they are expected to give tough time to the candidates of mainstream parties. Electioneering is in full swing in merged districts as the polls date is coming closer.