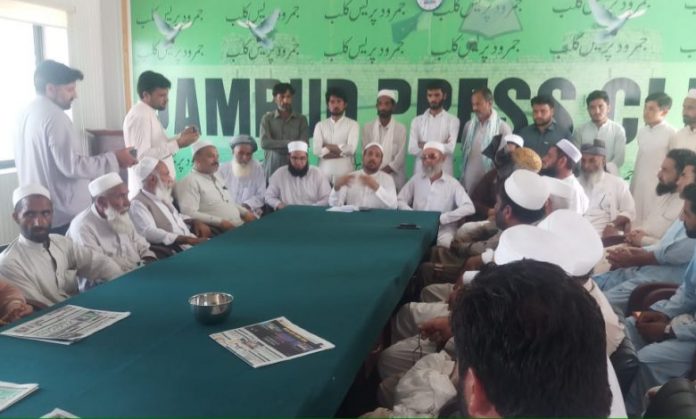 JAMRUD: Jamrud Political Alliance has announced to continue sit-in for rehabilitation and honourable repatriation of affected people of Kokikhel tribe in Tirah-Rajgal in Khyber tribal district on the Independence Day.

The Political Alliance President Zarghoon Shah Afridi, General Secretary Maulana Ghufranullah, Zar Wali Afridi, Safdar Afridi and others said while addressing a press conference at Jamrud Press Club on Monday that the Kokikhel tribesmen have unanimously decided to hold a convention for solidarity of the country and rehabilitation of affected people at Bab-e-Khyber. They said that during the convention, the tribal elders, leaders of different political parties and elected representatives will make demand from the government for honourable repatriation of Kokikhel affectees.

The Alliance leaders said they were displaced 10 years ago and shifted to Jamrud and Peshawar where they are living under extremely difficult circumstances. They said their houses, crops, forests and other properties were damaged after they left their area, but the government did not bother to inquire about their wellbeing.

The leaders said the Kokikhel affectees have not got the status of temporarily displaced persons (TDPs) which is even more disappointing. They said the areas of Kokikhel were declared clear from militants three years ago, but mines have not been cleared from the area so far.

The Alliance leaders said the issue has been raised by the leaders of political parties, therefore, the elders of Kokikhel tribes must not conduct talks with anyone without taking the Political Alliance into confidence.

The people belonging to Kokikhel tribe, who had shifted to Jamrud from Tirah, Rajgal, due to security concerns, have again started protests and Jirgas for acceptance of their demands. People of Kokikhel tribe migrated from their areas after the 2011 operation, but they did not get the status of TDPs or other privileges even after nine years of displacement.

One of the problems with Kokikhel tribespeople is that most of them have made computerised national identity cards (CNICs) with the address of Jamrud. The second reason is that the government did not ask Kokikhel residents to leave the area and they left on their own after Taliban occupied their areas.

Fata Disaster Management Authority (FDMA) says it can only give status of TDPs to any affected people who fulfill the criteria under the government SOPs.