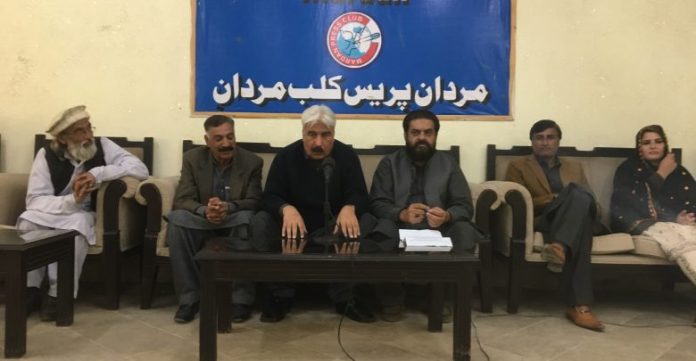 MARDAN: Khyber Pakhtunkhwa Aman Jirga has demanded the provincial government to do proper legislation to control the growing usage of ice drug in the province.

The president of the Jirga, Syed Kamal Shah and general secretary, Arshad Manan while addressing a news conference in Mardan Press Club on Monday said that the Pakistan Tehrik-e-Insaf members provincial assemblies have promised that after they come into power, they will raise the issue on assembly floor and would do proper legislation to counter the drug.

However, Kamal regretted that so far the issue has not come to  KP assembly. “For the sake of our new generation, we demand the government to legislate on the matter without any further delay,” the jirga asked. The jirga members also suggested strict punishment for all those involved in the business of Ice drug.

The jirga appreciated the efforts of the Mardan Police for arresting a gang involved in ice drug trade. However, he revealed that still, a dozen gangs are active in the district selling the drug to youth.

In KP, Ice drug or ‘crystal myth’ addiction is on increase. Though there is no exact data available However in November, last year, the KP Information Minister Shaukat Yousafzai estimated that 10,000 people are using the drug, including students.

But in the absence of any law, when the Ice drug dealers are arrested, they are tried under the drug control act which has no mention of Ice drug, due to which most of the offenders couldn’t get proper punishment from the courts.

Yousafzai said that government is taking steps to curb the use of crystal meth and are working on amending the Drug Control Act 1997. He added that the new law will sentence drug peddlers to seven years in prison and impose Rs0.5 million fine. However, so far they have not brought the draft law to the assembly floor.