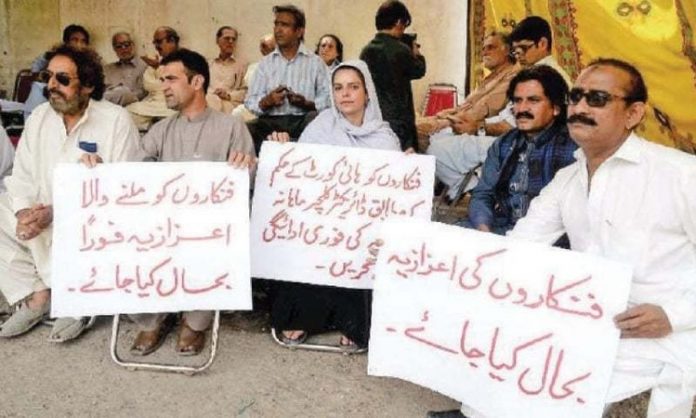 PESHAWAR: Singers and artists of Khyber Pakhtunkhwa in a meeting with Minister for Culture and Tourism, Atif Khan asked for the release funds for their monthly stipends on Tuesday.

Though the artists said, they were not satisfied with the response of provincial minister, however, the deputy director culture, Shahbaz Khan has assured them that all the seven instalments of ‘Sakafat k Zinda Amin’ program will be cleared during the month of January.

The minister was informed that the artists of the province are not finding opportunities to perform and show their culture to the world. They said that there are no private Drama and music productions, due to which they are depended on the government-run Tv station which has also reduced the regional programs and so it is not sufficient to fulfil their growing demands of life.

The artists told the minister that they unable to arrange their own entertainment programs as the fee of the only cultural hall of the city, Nishtar Hall, is Rs 60,000 per program which they cannot afford. “The Nishtar hall has been closed for the last 10 years. “The hall is not available for artists to perform,” senior artist Javed Babar told minister. Babar added that the hall should be given the artists, where they can produce quality cultural and entertainment programs so that not only the public can be entertained but also the artists be able to earn a livelihood.

Keeping in the view the problems faced by the artists, Prime minister Imran Khan in the presence of Pervez Khattak has announced Rs50 million to set up an endowment fund for the artists and singers of the province.

The fund includes the issuance of health insurance cards and free education for the children of artists. They told the minister that after the announcement, the program was started and Rs30, 000 per month as stipend was awarded artists but after the one month of payment, the program was stopped as some artists have challenged it in the Peshawar high court. Now that the PHC has cleared the issue but even then for the last seven months, no cheques were given to any artists.

The artists were assured the remaining instalment of the stipends will be cleared during the month of January.