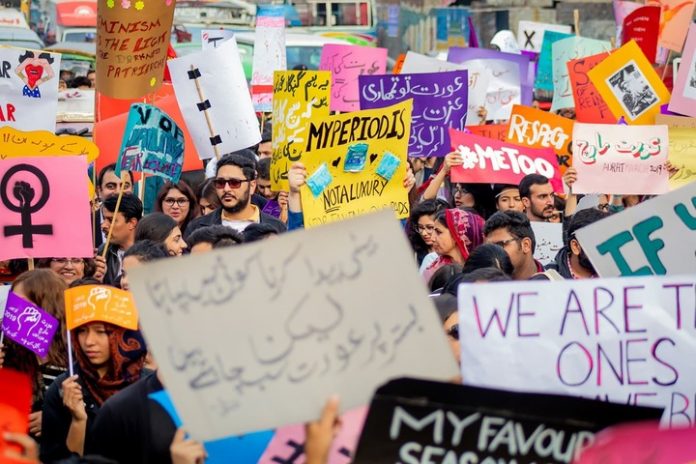 PESHAWAR: The Khyber Pakhtunkhwa Assembly on Wednesday declared the slogans on the women’s March ‘shameless and un-Islamic’ and asked the federal government to take legal action against the hidden forces tarnishing traditional family system and social values of the country.

The resolution was moved by Rehana Ismail of Muttahida Majlis-e-Amal (MMA) which the House adopted unanimously. The assembly members thoroughly debated issues related to the recently held protests in various parts of the country by women of civil societies and held it a conspiracy against the Islamic Republic of Pakistan. The matter drew the attention of the members of the provincial assembly from all political parties who explicitly expressed their views and termed the slogans on placards ‘shameless and un-Islamic’. 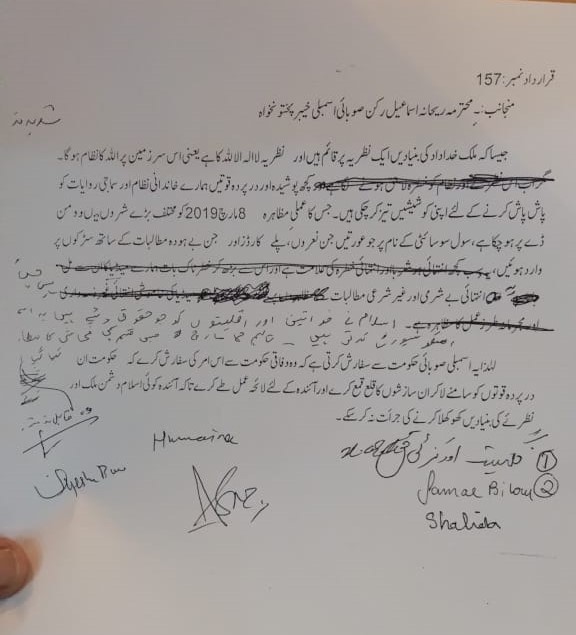 The resolution stated, “certain hidden forces are active to ruin our traditional family system and social values and which they demonstrated on March 8, the women day.” It further said that the slogans inscribed on the placards and banners were totally ‘unethical and against the norms of morality’. Adding the rights enshrined in Islam for womenfolk and minorities are unprecedented.

The resolution recommended the federal government to take the elements on whose behest the protests were carried out to task and evolve a consensual strategy to avert and discourage such gatherings in future which are meant to weaken the basic edifice of our social infrastructure.

Earlier, Inayatullah Khan of Jamaat Islami on point of order said that Pakistan came into existence in the name of Islam. He said that a recently conducted survey revealed that 98 per cent population is in favour of Pakistan as an Islamic country. He said that some Non-Governmental Organizations (NGOs) want to ruin the ideology of the country in the name of modernization.

Supporting the point of order, Leader of Opposition Akram Khan Durrani said that some protests held on March 8 were totally against Islamic values and our traditions. He said that a few months ago women cycle race was scheduled for Peshawar against the traditional norms but later cancelled on resistance of MMA. He said that such activities would not be allowed in the country and any action against our Islamic and traditional values would strongly be resisted.

Minister for Law and Parliamentary Affairs, Sultan Muhammad Khan said that women day is observed across the world every year on March 8. He said that being Muslims anything contradictory to Islamic principles would be resisted. He said Islam guarantees unprecedented basic rights to women.  He said that the matter should not be politicized.

Later, the Speaker asked the House to introduce a joint resolution over the matter. Acting upon the Speaker’s directive, MMA’s Rehana Ismail presented the resolution which was adopted unanimously.