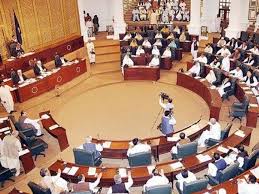 PESHAWAR, 15 December: The Khyber Pakhtunkhwa Assembly on Wednesday passed a resolution in support of merger of FATA with KP.

The resolution was presented by the Pakistan Tehreek-e-Insaf (PTI) member Haider Ali which was passed with a majority vote. The Jamiat Ulema-e-Islam-Fazl (JUI-F) members opposed the resolution. The JUI-F member Mufti Janan said the people of FATA have not been consulted for merger with KP. He said the JUI-F supports establishment of a separate FATA province. He said KP cannot bear the burden of FATA due to its limited resources.

Members of the KP Assembly were wearing black armbands on Wednesday in protest against the federal government for not allowing donor agencies to work in KP. They said head of a donor agency was recently stopped from visiting KP on pretext of security concerns.