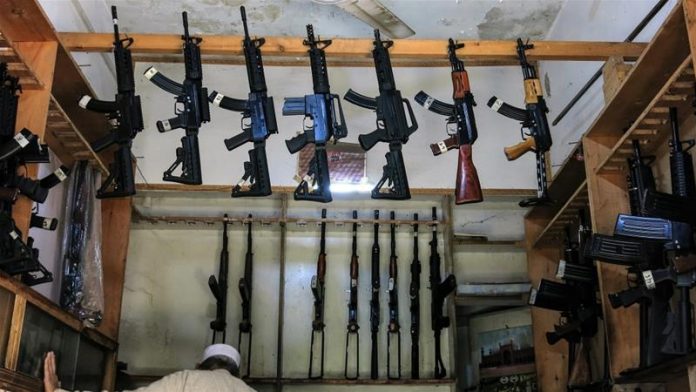 PESHAWAR: A resolution has been presented in the Khyber Pakhtunkhwa assembly on Monday asking the government to make efforts for ending gun violence and possession of illegal guns in the province.

The resolution was brought to the house by the MPA Saleh Khattak, saying this house resolves that the concerned authorities – according to KP illicit Arms Act, 2014 – should form a mechanism for the surrender of Illicit Arms, curtail the easy access to dangerous weapons and increase the penalty for possessing illegal arms to 10 years in prison.

The resolution citing the data of Gunpolicy.org said the estimated number of guns (both licit and illicit) held by civilians in Pakistan in 2017 is 37917, 000. The data reflect the number of licensed gun owners in Pakistan by the year 2014 is reported to be 352,843.

Citing media reports, the resolution said that 20 million firearms, both legal and illegal, exist in Pakistan and only seven million posses registered firearms. In Pakistan, 116 individuals out of every 1,000 possess firearms, making it sixth in the world for gun ownership. The homicide rate is 7.3 per one hundred thousand.

PESHAWAR: Leader of the Jamat-e-Islami (JI) in the Khyber Pakhtunkhwa assembly Inayat Ullah Khan has asked the government to investigate the issue schools books smuggling issue from district upper Dir. He presented a noticed of attention in the assembly in this regard.

The notice of attention said that government schools books are being smuggled in trucks and recently a truck full of books has been recovered and two KP education department employees were found involved in the crime.

Inayat Ullah Khan said on the assembly floor that such issue was also surfaced in the past and education department officials were found involved in the issue, but no action was taken against them by the government.

The KP adviser on education has said that he will investigate the issue and asked for one week time to formulate a report.