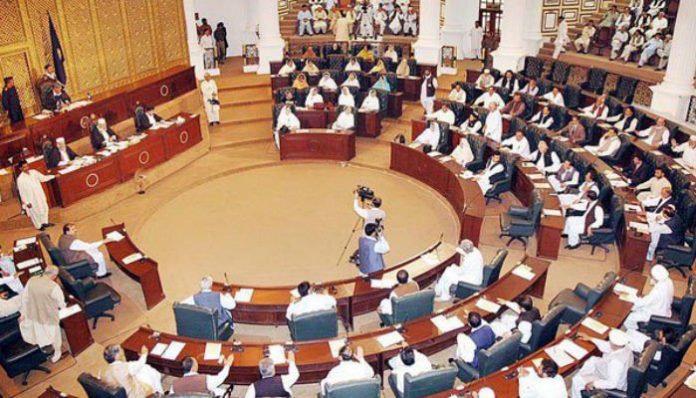 PESHAWAR: The KP Assembly session on Tuesday witnessed pandemonium over the issue of allocation of development funds to lawmakers and alleged slow response of the government to the Mohmand marble mine tragedy.

The opposition members lodged protest over alleged unfair distribution of development funds and threatened they will approach the courts once again in this regard apart from staging a protest outside the Chief Minister’s House. They alleged that development projects are being carried out only in few selected constituencies of government members, while the constituencies of the opposition members are being ignored. They alleged that the government has backtracked from the agreement with the opposition regarding development funds distribution.

Members from the merged tribal districts also staged a walkout from the House when the speaker didn’t give them the floor to take part in the discussion over the unavailability of funds for the ongoing development schemes.

The KP Assembly Speaker Mushtaq Ghani assured that he will summon a meeting of the treasury and opposition benches in the next few days to address the issue.

KP Finance Minister Taimur Saleem Jhagra said the opposition members were responsible for delay in completion and execution of development projects. He said some opposition members instead of resolving issues in the Assembly went to other forums (court) for the release of funds. He said uplift projects in Peshawar were affected by the stay order issued by the court. However, he also admitted that the pace of work on development schemes was affected by financial problems.

About the marble mine collapse incident in Mohmand tribal district, the ANP leader Nisar Mohmand, who is local lawmaker, lambasted the government for its slow response towards the tragedy.

He said majority of the victims belonged to poor families and the incident was result of blast for mining that also should be investigated either protective measures were adopted or not.

Special Assistant to CM, Arif Ahmadzai said rescue operation was underway on and officers of the concerned departments were monitoring the operation. He said the victim families will be provided all types of assistance.

The House also approved the KP Forensic Science Agency Bill, 2020 to establish a forensic science agency which will operate under the Home Department. The forensic agency will be bound to present an annual report to the interior ministry on July 31 every year, which the ministry will then table in the provincial assembly within a month.

Minister for Social Welfare Hasham Inamullah Khan said a proposal was under consideration to increase job quota for differently-abled persons from 2 percent to 5 percent.