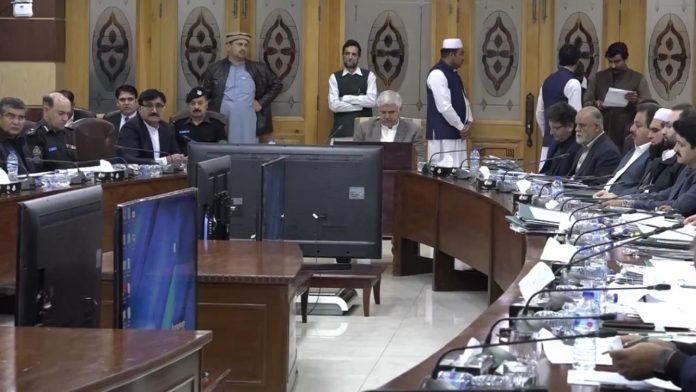 PESHAWAR: Chief Minister Khyber Pakhtunkhwa Mahmood Khan has approved 25 new police stations for the 25 sub-divisions of tribal districts. He also announced that he will soon give a schedule to the provincial Ministers for visiting all the merged districts.

He constituted a committee comprising Ministers Law, Finance and Information to look into the establishment of Directorate General Law and submit recommendations in the next cabinet meeting for approval. The Chief Minister was addressing the Cabinet meeting at Cabinet Room of Civil Secretariat Peshawar on Tuesday. Provincial Ministers, Chief Secretary, Additional Chief Secretary and administrative secretaries attended the cabinet meeting.

Mehmood Khan directed to nominate reputable peoples for including in the boards of different departments adding that his government was committed to the transparency and merit without which the public welfare will be just a hollow slogan, he added.

The Chief Minister condemning the intrusion of Indian Air Force warned it not to espouse wishful thinking. The Pakistani forces have the capacity to safeguard the country and the nation and force a total discomfiture to the enemies. We are aware of the inimical designs of India adding that the people fully backed their armed forces against the enemy.

“Their extremist designs have exposed the Indian at international level as well, demanding to stop tyranny and oppression of the innocent Kashmiris,” the Chief Minister said.

Mahmood Khan directed to search out reputable and capable persons for induction into the board of different public sector entities which would be passed from the provincial Assembly.

The Chief Minister said that after the merger guided by the constitutional amendments, all the laws and regulation of the public sector entities stayed extended in the newly merged districts. He constituted a committee to look into the anomalies of the regularization of employees. The Committee will comprise Provincial Ministers Taimur Saleem Jhagra, Shaukat Yousafzai and Sultan Muhammad Khan which would submit its recommendations as soon as possible.