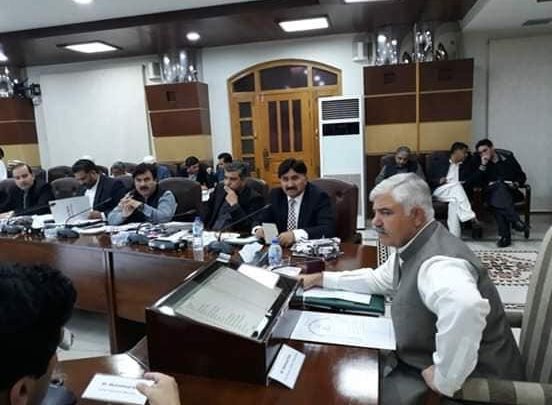 KP Information Minister Shaukat Yousafzai said at the media briefing after the cabinet meeting that Chief Minister Mehmood Khan chaired a long meeting of the provincial cabinet during which several important decisions were made. He said the KP government decided to pay its share of the total 3 percent share of tribal districts in the National Finance Commission (NFC) Award. He said that under the NFC Award, KP has to pay Rs10.18 billion to tribal districts, Centre has to pay Rs54 billion and Punjab has to pay Rs38 billion.

Shaukat Yousafzai said a concept paper will also be prepared for development projects in the merged districts. Mr Yousafzai said the cabinet also approved amendment in the Privileges Act for Provincial Ministers under which the cabinet members and government officials will be entitled to use official helicopter.

The minister said the mass transit train project will be initiated with the cooperation of China under which Swabi, Mardan, Charsadda and Nowshera will be linked to Peshawar through rail link. He said the cabinet also approved appointment of associate Qazis in Malakand Division who will make decisions under the Holy Quran and Sunnah. Appointment of two judges of the Labour Appellant Tribunal was also approved in the meeting.

Mr Yousafzai said the world safety standard will be followed in mines in KP. He said the government has made a plan for better security and remuneration of the mine workers. He said the heirs of the deceased mine workers will get Rs500,000 compensation.

The minister said a law is also being drafted for extracting stones, sand and other small-level minerals. He said the National Disaster Management Act has also been amended and the powers to declare natural calamity have been given to the Relief Department. He said a non-ADP (annual development programme) scheme has been formed for relief activities.

Mr Yousafzai further said the share of tobacco development cess of the Swabi University has been reduced from 50 percent to 10 percent. He said 250 employees, including 197 from the Health Department, have also been regularised.

He said the chief minister took notice of the heavy schoolbags of children and directed the Education Department to make sure that no private school receives fee of summer vacations.