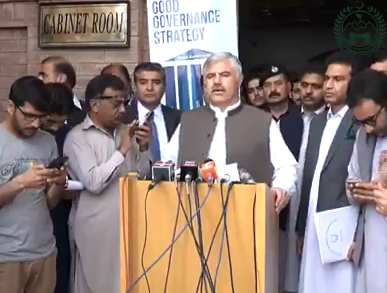 The launching ceremony was attended by commissioners, deputy commissioners and other high-ranking officials from all the districts of KP. Talking to media persons after launching the policy, the chief minister said the government is committed to make government departments public serving. He said the basic aim of this policy is to ensure transparency in various government departments for provision of speedy services to general public and will ensure accountability of government officials.

The chief minister said the governance strategy will be implemented in letter and spirit and no compromise will be made in its implementation. He said the aims and objectives and benefits of the policy would be communicated to citizens in order to motivate them towards participative governance. Mehmood Khan said that apart from providing services to citizens at their doorsteps, the new strategy will also identify public office holders who lag the capacity to perform their duties. He said performance of the government departments will be evaluated through this performance.

An official statement issued after the launching ceremony stated that 205 performance indicators have been identified in various sectors aimed at improving the services delivery of government while simultaneously gauging the performance of various government office holders. The policy has five basic ingredients including open government and transparency, public services delivery, citizen participation, accountability and innovation and technology.

Under the policy, the citizens will have the right to access all the documents and proceedings of the government for effective public oversight. The policy will endeavor to ensure public service delivery through implementation of regulatory functions, smart management for improved performance and technology driven services delivery.

The policy encourages citizen participation for effective implementation. Efforts will be made to ensure coordination among all the government departments and internal accountability will also be ensured. The new policy will fully utilise the scientific innovation and technology through digitalisation of data regarding the government processes, computerisation of human resources, employees’ data and land records.

The use of citizen portal mobile applications, ERD, GIS and MIS are manifestations of government responsiveness to achieve a competitive edge and attain the ultimate goal of good governance.