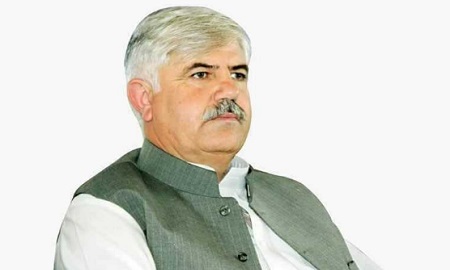 PESHAWAR: Khyber Pakhtunkhwa Chief Minister Mehmood Khan has taken notice of the murder of a journalist in Peshawar on Monday.

According to a statement issued from the Chief Minister House, Mehmood Khan has asked Inspector General Police Salahuddin Mehsud to hold inquiry into the murder of the journalist and present a report within two days. The chief minister has expressed sorrow and grief over the murder of the journalist and prayed Almighty Allah to rest the departed soul in eternal peace.

Noorul Hassan, a journalist hailing from Nowshera, was shot dead by unknown armed men on the Ring Road in Peshawar on Monday night. A cameraman, Sabir was also critically injured in the firing and he is under treatment at Lady Reading Hospital in Peshawar.

Noorul Hassan was associated with Royal news channel and a news agency. Police says it was a target killing incident and raids are being conducted to arrest the culprits.

In a separate development, the alleged killer of senior journalist and Charsadda Press Club general secretary Ihsan Sherpao has been arrested from Islamabad.

On 30 October, the accused Arshid Jamal had allegedly shot dead Ihsan Sherpao over a domestic dispute. Four persons had lost their lives in the firing. The accused had fled the scene after the incident.