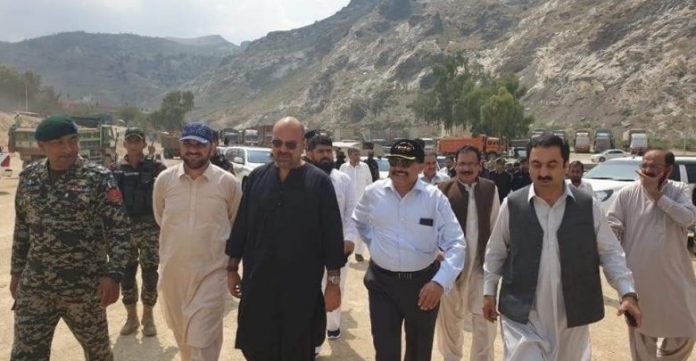 Taimoor Saleem Jhagra inspected the facilities at the Torkham Border after announcement by the federal and KP governments to keep the border open round the clock on experimental basis. Peshawar Commissioner Shahab Ali Shah, Khyber Deputy Commissioner Masood Aslam Wazir, security officers and local administration officials were also present on the occasion.

Taimoor Jhagra inspected different parts of the border gate along with other officials. The minister reviewed the arrangements for people crossing the border from both sides and expressed satisfaction over the facilities.

The minister also reviewed arrangements for the expected visit of Prime Minister Imran Khan to Torkham border to open the round the clock service formally. He directed the concerned officials to finalize arrangements for expected visit of the prime minister to formally open the service. He said the formal inauguration will be a big moment particularly for people of Khyber tribal district, therefore, it must be a grand ceremony.

On Monday, the Pak-Afghan border at Torkham was opened round the clock from on experimental basis.

The project of keeping the border open round the clock has been initiated on the directions of Prime Minister Imran Khan. Under the project, the Torkham corridor will remain open during day and night.

One January 29, Prime Minister Imran Khan had made directions to concerned authorities to make arrangements for keeping Torkham border open 24/7 within six months. He said this step will promote bilateral trade and people-to-people contacts.