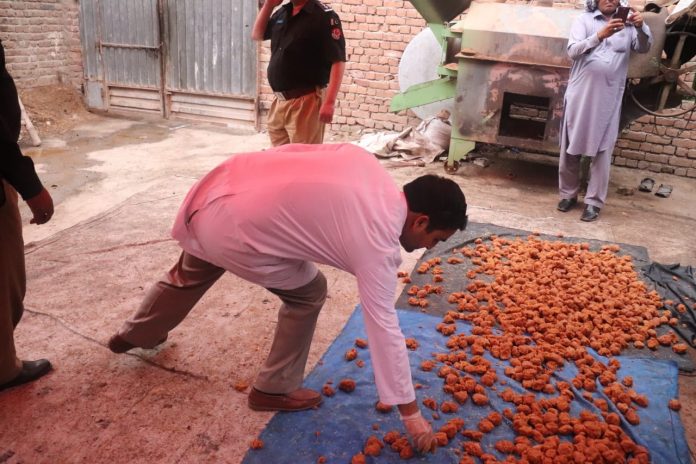 PESHAWAR: Khyber Pakhtunkhwa Food Authority in a joint venture with excise intelligence has sealed a synthetic Gurh making factory situated inside a home at Hazar Khwani area of the provincial capital.

The Gurh making factory was sealed while a case has been registered against its owner under the relevant section of the law.  The officials informed that two accused were also arrested from the factory and further investigation is underway.

The synthetic Gurh is made from glucose and sugar which is a crime under KP food safety act, and no one is authorized to do so in the province.  Director General KP Food Authority Riaz Khan Mahsud in a statement issued, announced Rs 10000 cash prize for the excise intelligence team for being synced with authority and finding out the hidden factories that were playing with the lives of innocent people.

Director Operations Khalid Khan Khattak while giving details of the operation maintained that provincial excise intelligence chief Naveed Jamal came up with information about synthetic Gurh production factory. “We debuted a team led by Food Safety Officers Ahmad Ali Shah and Wasif Shah for to reach the venue along with technical squad. They found making of Gurh with the help of Glucose, sugar and non-food graded colours,” director operations revealed.

Food Safety Officer Ahmad Ali Shah maintained that more than six thousand kilograms of synthetically prepared Gurh was seized and two of the accused were arrested during the operation while the machinery was dismantled before sealing the factory.

The director general of KP food authority said that they are soon going to open an office in district Charsadda to keep a check on food production factories. However, he said that they are ready to provide full sport to the district administration in countering illegal practices.