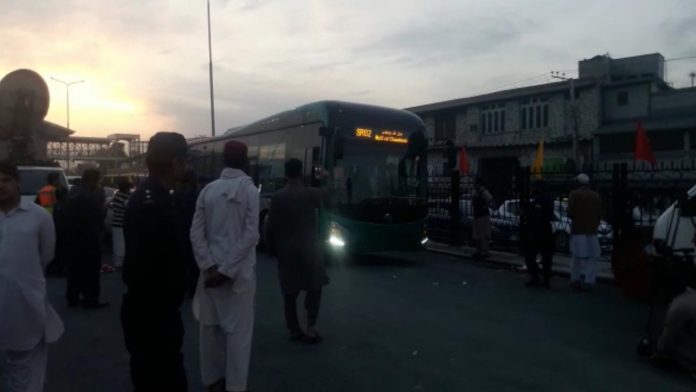 PESHAWAR: From ‘inauguration’ to ‘soft opening’, the Khyber Pakhtunkhwa government has conducted a ‘test runs’ on the Bus Rapid Transit (BRT) Project and announced another delay in the completion of the much-awaited project.

The Khyber Pakhtunkhwa government spokesperson, Shaukat Yousafzai, who kicked off the ‘test run’ from the Hayatabad station to Chmakani on Friday claimed that the civil work of the Project has been completed and the remaining work would be completed soon.

Senior officials of the Peshawar Development Authority (PDA) were also present to kick off the test run in three BRT buses on its route from Hayatabad to Chamkani. Earlier the K-P  government has announced that Work on the BRT project is speedily under way and the soft inauguration of the bus service will be held on March 23. However, they couldn’t meet the deadline.

The minister for information while talking about the delay said that it is due to the heavy rains for almost a month which has delayed further delayed the completion of the work on the much-awaited project. From inauguration to “soft opening” to now “test runs”, Peshawar’s BRT is set for another delay.  Three buses of the services were started from the Hayatabad station and passed through the BRT track and reached the Chamkani, the starting point of the BRT.

Yousafzai added that they have promised a test drive and now they have completed it on time. The Minister said that it is the Pakistan Tehrik-e-Insaf government which has given the province such a mega project in the form of the BRT.

According to documents pertaining to the project, 11 out of 32 stations of the BRT projects have not been prepared yet, whereas only 21 out of 220 buses have so far been brought to the province.

The first deadline of the project’s completion was in April 2018.