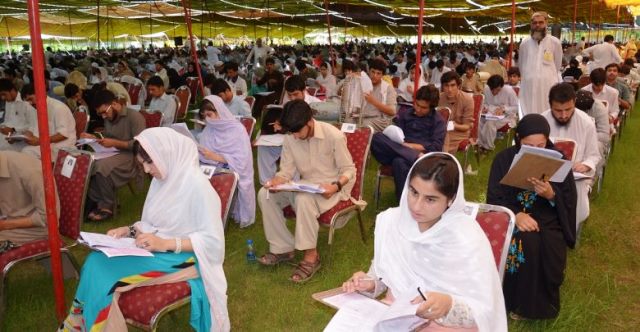 PESHAWAR: The Khyber Pakhtunkhwa government on Tuesday finally cancelled the test for appointment of primary school teachers (PST) across the province over complaints of paper leak and mismanagement.

Chief Minister Mahmood Khan had ordered a fact-finding inquiry into the alleged paper leak in February. The probe was carried out by the provincial inspection team after reports of paper leak from Dera Ismail Khan, Karak, Mardan, Shangla, Buner and Upper Dir districts.

The fact finding committee was supposed to furnish its report to the chief minister within a week. However, the government kept delaying decision on the issue probably due to the fact that it was busy in other matters, particularly the Senate elections. During that time, rumours about cancellation of the PST paper kept surfacing on mainstream and social media, but the provincial government insisted at that time that the matter was not decided.

On Tuesday, the government finally confirmed that the test has been cancelled. Minister for Elementary and Secondary Education Shahram Khan Tarakai said that the inquiry report was presented in the provincial cabinet meeting.

He confirmed that the PST test result has been cancelled owing to the paper leak. He said the NTS will re-conduct the test for the position in phase-wise manner. He said merit and transparency in the recruitment process was the top most priority of the government.

Test for PST posts was held on February 07 in different districts of KP, however, ahead of the written examination for hiring, the question paper was allegedly leaked on social media. In Peshawar, some candidates alleged that answer keys were provided to candidates before the paper, which raised a question mark on transparency.

The Elementary and Secondary Education Department had given the contract of appointment of different district cadre teaching posts to NTS and it has conducted tests for the posts of senior subject teachers (SST), physical education teachers (PET), certified teachers (CT), Arabic teachers (AT), drawing masters (DM), Qari/Qaria and PST.

Tests for all seats have been taken and merit lists of SST posts are also displayed. The status of the remaining teaching posts, except PST, remains clear. However, candidates are showing concern over delay in display of merit lists.