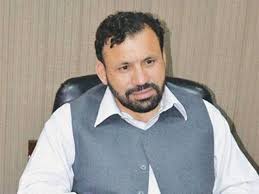 PESHAWAR, 13 July:The Khyber Pakhtunkhwa Government while expressing grave concern on immense delay in fulfilling the constitutional obligation of  formulating 9th National Finance Commission (NFC) and continuous usurpation of rights of the province has decided to lodge a formal protest to the centre in this regard.

It has also been decided to implement the announcement regarding summoning All Parties Conference (APC) on the issue as well as developing close liaison with other provinces including Sindh and Baluchistan to take stock of the situation and adopt consensus strategy on it.

A number of decisions have also been made to ensure implementation on announcement and targets of the provincial budget including holding meetings on quarterly progress review under Finance Minister and monthly reviews under Secretary Finance.

Khyber Pakhtunkhwa Finance Minister Muzaffar Said Advocate chaired a meeting at Civil Secretariat Peshawar to this effect wherein matters including timely achievement of the developmental goals announced in the budget, progress on new NFC award and developmental strategy of the provincial government were threadbare discussed while a number of decisions and recommendations were also made.

The meeting besides Secretary Finance Ali Raza Bhutta and other high ups was also attended by former senior bureaucrats associated with the Finance Department.

It was decided that the centre would be approached by provincial bureaucracy on weekly basis and ministers level on monthly basis as well as the Chief Minister would be kept abreast with every progress to press the federal government for announcing new NFC award and it finds no further justifications for the delay of new NFC.

Muzaffar Said Advocate while paying tributes to the officials of Finance Department on preparation of the provincial budget during hot summer days of Ramzanul Mubarrak and working round the clock also acknowledged that finance department officials did marvelous job by encashing the cheque of outstanding hydel net profit (HNP) arrears upto Rs.  26.3 billion as the cheque was issued on June 30 by WAPDA that could not be honoured even next day due to commencing of the new fiscal year but KP Finance Department made it possible by authorizing BoK in Lahore to collect the cheque and transfer the amount to provincial kitty through State Bank at the eleventh hour.

He expressed the hope that all the departments including Health, Education and Local Government would be given funds timely to accelerate the pace of development.

The Finance Minister regretted that centre was bent upon to continue the 7th NFC award in the new fiscal year too despite the fact that this award was constituted before the 18th Constitutional amendment on the basis of 18 years old census.

He however lauded the political acumen of Chief Minister Pervez Khattak by floating the provincial issues on national horizon effectively.  He deplored that financial burden on the province has been increased thousand folds after concurrent list and transfer of the departments to the provinces.

He said that the centre has the right on only 20% and not 42.5 % resources while the remaining 80% must be transferred to the provinces as must.

It is pertinent to mention that under 7th NFC award, the centre presently received 42.55 %, Punjab 51.74%, Sindh 24.55%, Khyber Pakhtunkhwa 14.62% and Baluchistan 9.09 % funds of the national resources but it has been decided in the previous NFC meeting that the new award would be promptly constituted in backdrop of 18th amendment, provincial autonomy, national action plan, transparent use of foreign aid and possible impacts of CPEC but the federal government instead made no progress in this regard. On the other hand, the federal debts crossed Rs. 21 billion that were double than 2008 besides eminent increase in the inflation rate.

Centre also owe to pay Rs. 119 billion to Khyber Pakhtunkhwa under Water Accord.  Poverty, unemployment and backwardness reached to the climax in Khyber Pakhtunkhwa due to prolong stay of Afghan refugees, TDPs, terrorism and natural disasters that must be realized by the centre. Providing only one per cent funds to the province in head of  terrorism losses was sheer injustice with its people that required increase to 5% at least while the centre must also realize the fact that economic stability of Khyber Pakhtunkhwa will ultimately lead to the national progress and prosperity.