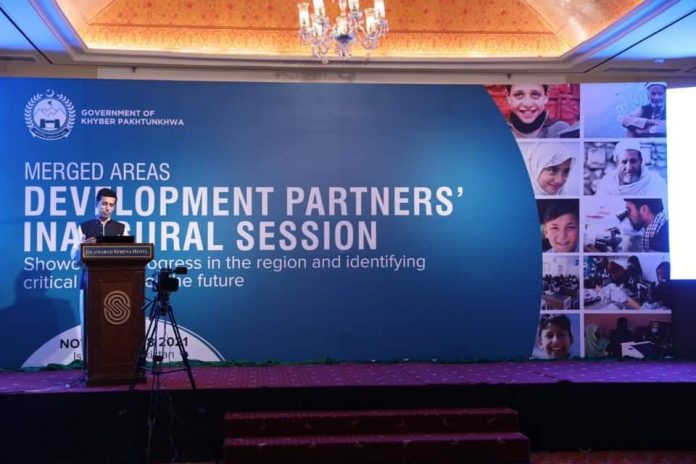 PESHAWAR:  Khyber Pakhtunkhwa government on Monday arranged a meeting with international donors to review progress made in the Merged Areas (MA) and discuss the development vision for moving forward.

The event held in Islamabad, titled “Merged Areas Development Partners’ Inaugural Session”, was first in the series of interactions aimed to share the vision of the KP government and seek technical support and expertise in devising the second phase of Accelerated Implement Programme (AIP).

In his opening remarks, KP Minister for Health and Finance Mr. Taimur Jhagra said, “The presence of half of the cabinet members signifies the importance of this event regarding development of the MA.”

“The region has witnessed seven decades of neglect. We have seen how the lack of investment has led to consequences for the people and the area. There is a need to continue to introduce game-changing interventions and fast-track initiatives through innovative solutions.”

He said that at the time of the merger in 2018, the KP government took over the massive challenge of transforming the MA and bringing it at par with the rest of the province with the 10-year Tribal Decade Strategy, whose Phase-I of the AIP is concluding soon.

On the occasion, KP Additional Chief Secretary Mr. Shahab Ali Shah shared his experience of serving the MA in various capacities and said, “I have lived with the people of MA during the insurgency, and the subsequent military operations that led to their temporary displacement. And then I witnessed them returning to their homes that were razed to the ground. Their suffering and tragedy require us to fulfill our commitments to them.”

“They were caught in an international conflict. It is high time that we give back to these people and stabilize the region,” he said.

Shedding light on the progress made in the MA in the last three years, Mr. Shah said that a total of 327 schemes were proposed as part of AIP-I and MA Annual Development Plan (ADP), out of which 209 are currently ongoing and another 33 are in the pipeline. Around Rs60 billion have been spent on the socio-economic uplift of the region so far. In addition, the KP government has distributed Rs1 billion under the Insaf Rozgar Scheme.

FCDO Director Ms. Annabel Gerry said, “We are at a critical junction now, and need to preserve the stability and build on the progress already made to build a momentum in our development efforts.”

“We remain committed to help the provincial government in supporting innovations in health, education, gender equality and infrastructure development,” she said.

USAID KP Director Mr. Xerses Sidhwa appreciated the KP government’s commitment towards the MA and said, “We value our partnership with the KP government and look forward to seeing how we can be of more use in AIP-II.”

Knut Ostby, Resident Representative UNDP, appreciated the “timely organization” of this event, and congratulated the KP government for AIP-II. World Bank Country Director Najy Benhassine also pledged his support for the provincial government in boosting the health, education and other aspects of the social sector.

Concluding the event, Minister for Elementary and Secondary Education Mr. Shahram Khan Tarakai said, “We thank the UNDP’s Merged Areas Governance Project (MAGP) for bringing us together and allowing us to share the values and vision for the people of MA,” he said.