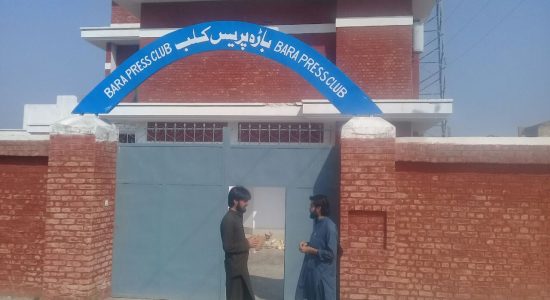 BARA: Bara Press Club president Khialmat Shah Afridi has called upon the government to give due rights to journalists working in the tribal districts.

In a statement, Khialmat Shah Afridi said the government should pay proper attention to the press clubs in the merged districts as journalists doing reporting from the area are facing a lot of difficulties and they lack back facilities for carrying out their professional duties. He said the government’s statements for welfare of tribal journalists are confined to media only and nothing has been done for them practically.

Khialmat Shah said the present government, instead of arranging professional training for tribal journalists, was adding to their difficulties. He said that like other people of the tribal districts, journalists also offered sacrifices in the war against terrorism and several media persons lost their lives while carrying out their professional duties. However, he said, the media persons didn’t get anything in return except for the hollow slogans and publicity statements.

Mr Afridi said the tribal journalists were expecting financial package on the pattern of Peshawar Press Club after merger with Khyber Pakhtunkhwa. He said the journalists were also expecting the government will arrange training programmes for them. He said the incompetence of the provincial information minister and director information of merged districts is evident from the fact that they have no idea about the location and the number of journalists associated with different press clubs in tribal districts.

Khialmat Shah said Bara Press Club was affected the most due to terrorism and about a dozen of its members are now living in rented houses in Peshawar and other areas due to lack of residences in Bara. He said the members of Bara Press Club had a meeting with former information minister Fawad Chaudhry recently and he had made several promises and issued directions to the provincial information minister to resolve issues of tribal journalists, but nothing was done after that.