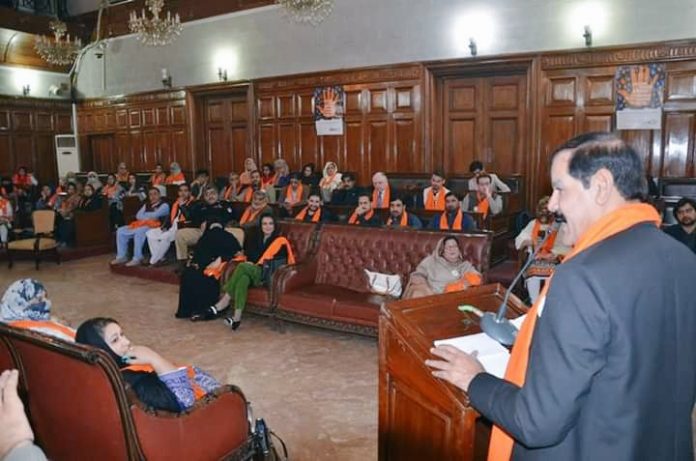 PESHAWAR: To commemorate the 16 days of activism for ending violence against women and girls, a launch event was held at the Khyber Pakhtunkhwa Provincial Assembly, Peshawar with the support of UN Women. Speaker, Mr. Mushtaq Ghani, graced the occasion as the chief guest.
The event was attended by members of Provincial Parliament, women caucus members, Khyber Pakhtunkhwa Commission on the Status of Women (KPCSW), United Nations, civil society and academia  representatives along with students from Shaheed Benazir Bhutto University.
Mr. Mushtaq Ghani, Speaker of Provincial Assembly of Khyber Pakhtunkhwa, in his remarks, reaffirmed the support of the government in ensuring the protection of women’s rights and eradicating gender-based violence.

“The Government of Pakistan continues to demonstrate its commitment to promoting women’s empowerment and gender equality across the country as a signatory to several rights-based international covenants and through the progressive formulation of national and provincial laws, policies and initiatives. From conflict zones to urban spaces to university campuses, this violence compels all of us to be preventers of this pandemic and to take action NOW.”

Khyber Pakhtunkhwa has made much progress in ensuring the rights of women and girls through legislation that include Child Protection and Welfare Act 2010, Elimination of Custom of Ghag Act 2013, Khyber Pakhtunkhwa Dowry, Bridal gift and Marriage Function Restriction Bill 2017, Harassment of Women at Workplace Act and the recently endorsed Domestic Violence Bill are some of the examples.”

Toward the end of the event, a Pashtun female poet also presented a poem on the challenges of a woman in multiple phases of her life.