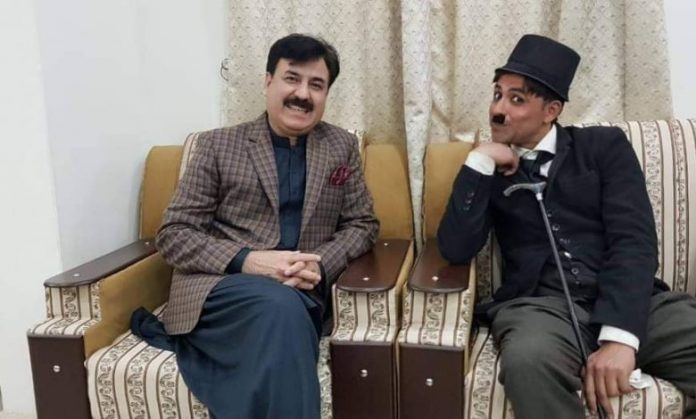 PESHAWAR: Usman Khan, a Peshawar-based lookalike of legendary comic actor Charlie Chaplin, has received an offer of a job from the Khyber Pakhtunkhwa government.

KP Minister for Labour and Culture Shaukat Yousafzai invited Usman Khan to his residence and extended him a job offer to him to encourage him and to provide him support for continuing to entertain people through his talent. The minister told media persons after the meeting that the KP government would provide a suitable job to Usman Khan and hoped that he would accept the offer.

Peshawar’s Charlie Chaplin earned appreciation on social media due to his comic expressions with an objective to bring smiles to people’s faces. His videos are doing rounds on the internet these days and are liked by people from Pakistan and even abroad.

Shaukat Yousafzai said the KP government will support Peshawar’s Charlie Chaplin at every level. He said he shared Usman Khan’s videos with Chief Minister Mahmood Khan who liked it. He said that Usman Khan will soon get a government job. He said the job offer has been made after approval from the chief minister. He said the employment offer is a gift for Usman Khan, and he would be able to focus more on his talent after getting the job.

Usman Khan thanked Shaukat Yousafzai and the KP government for the encouragement and for the job offer.

Usman Khan said he used to watch the videos of Charlie Chaplin since his childhood and he also wanted to imitate him to bring smile on faces of people. He said when he started showing his talent, it was a time of coronavirus lockdown and he aimed to bring some positivity in the society.

The Pakistani Charlie Chaplin said he apparently looks very happy, but people would feel sad for him if they know about his story. He said he shuts the doors of his past life whenever he comes out of his house and only aims to look forward and try to make people happy. He said the people of KP have seen very tough times, and if now they are happy to see him then he is ready to make them happy.