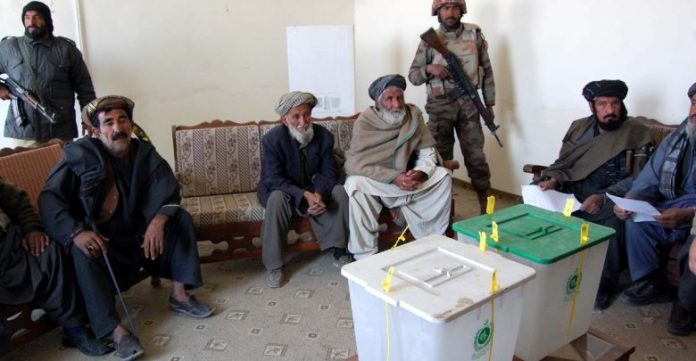 PESHAWAR: The Khyber Pakhtunkhwa government has recommended the Election Commission of Pakistan (ECP) to postpone the provincial elections in tribal districts scheduled to be held on July 2.

The recommendation has been made in a communique sent to the ECP by the Home and Tribal Affairs Department of Khyber Pakhtunkhwa. The communique says election scheduled on July 2 on 16 seats of KP Assembly in the merged districts may be postponed keeping in view the law and order situation, threat of cross border attacks by terrorists based in Afghanistan, threat of attack on political leadership of the country, problems created due to shifting of police powers to Levies and Khassadars and lack of training of Levies and Khassadar personnel about election duties.

The communique recommends that the provincial polls in tribal districts may be postponed by 20 days and the new date of elections must be fixed at July 25. It notes that elections are breathing life for democratic nations and people of the tribal districts are availing this opportunity for first time in the constitutional history of Pakistan. However, it says, the current situation due to some recent developments and threats from different quarters may sabotage the elections. The communique also mentioned the situation in North Waziristan after the incident of clash between the PTM activists and security personnel in which several casualties occurred.

Speculations about postponement of elections were making rounds after the incident in North Waziristan. Several soldiers have lost their lives and many others injured in the recent spate of attacks in the tribal district. In such a situation, the peaceful holding of elections, particularly in North Waziristan, looked extremely difficult. However, it is up to the Election Commission to accept the recommendation or not.

KP Information Minister Shaukat Yousafzai has confirmed sending of the communique and said that elections would be held in tribal districts after proper preparations.