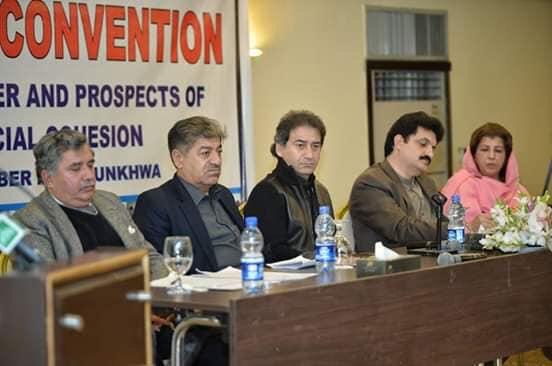 PESHAWAR: Ajmal Wazir, spokesperson for Khyber Pakhtunkhwa government has said that there were lapses reported in the conduct of the 6th population census in tribal areas and a large number of tribal people have not been counted in the process.

“It is very strange that there will be 16 MPAs from the area which was represented by 12 Members of National Assembly (MNAs),” said Ajmal Wazir while addressing the tribal youth convention held at the pearl continental hotel on Wednesday.

Wazir added that registered number of Internally Displaced Persons from North Waziristan  was 1.2 million, which the tribal people fear, were not included in the census process. According to the Census 2017, the total population of North Waziristan is 543254 which is far less than registered at the time of people displacement from the district in 2014.

However, the spokesmen for the KP government assured the youth convention that the election for the provincial assembly will be held on time and in future, all their grievances will be resolved by the KP government.

He told the youth that on the directives of the Prime Minister, Imran Khan, they’ve focused on the development of tribal areas. He added that provincial ministers of KP have already started visits and health insurance cards will be extended to the merged districts, PM laptop scheme will be introduced and the tribal youth will be given interest-free loans to start their own businesses.

“Not even a single government employee will be terminated,” said Wazir. “All the vacant posts will be filled with local youth.”

The Khyber Pakhtunkhwa Minister for sports, culture Tourism, Muhammad Atif Khan also addressed the gathering and announced that some 24 thousand tribal youth will be employed in the police force from the tribal areas. He said that very soon, there will be the same law governing both the tribal areas and settled districts of the province.

Atif, who is also holding the ministry of sports said that the provincial government will construct six sports complexes in six different Tehsil of tribal areas in the first phase.

The minister said that there will be 16 elected MPAs from Tribal areas. Apart from this, the tribal districts have three women MPAs  and one representative of minorities on reserved seats.