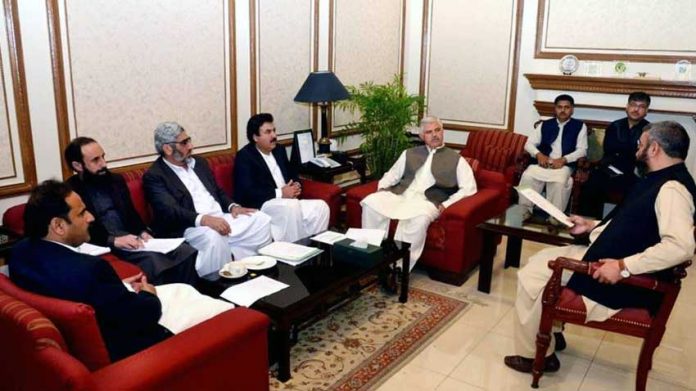 PESHAWAR: Chief Minister Khyber Pakhtunkhwa Mahmood Khan has announced the establishment of a women university campus in Swat on Saturday. In this connection, he gave directions to procure land either at Kabal or Odigram area of the district Swat.

The Chief Minister also said that he would soon inaugurate the Shangla campus which has been accomplished at a cost of Rs 1.5 billion. He also revealed that the language centre at Kanju swat would also be inaugurated soon. Besides this, he also announced the establishment of a Basic Health Unit, A school and one college at Charbagh through Frontier Education Foundation.

The announcements were made during a meeting in Peshawar about establishing Women university campus in swat. Information Minister Shaukat Yousafzai, MPA Faisal Hakim Khan, Vice Chancellor Swat University and other officials were also present on this occasion.

He was given a detailed briefing about acquiring land for this purpose. Talking about the water issue faced by Swat University, the Chief Minister ordered for the construction of a tubewell and water supply on a priority basis.

He also issued direction for the provision of pink buses. He also agreed for initiating boys colleges in rented buildings and added that during his next visit to Swat, an academic block of Swat university would be inaugurated.

Chief Minister Khyber Pakhtunkhwa Mehmood Khan has said that a strategy has been devised to develop tourism and other natural resources as a foundation for economic growth in Malakand, Hazara and tribal districts of the Province.

Several projects have been initiated in industries, tourism and communication sectors adding that Southern districts were being opened for trade in industries and tourist activities.

These views he expressed while talking to the President of Dera Ismail Khan Press Club at Chief Minister Secretariat in Peshawar on Saturday. Advisor on merged districts and spokesperson of provincial government Ajmal Khan Wazir was also present on this occasion.

He specifically mentioned Peshawar Charsadda, Nowshera, Mardan and Sawabi where circular railway track was being established. Swat motorway, economic zones of Rashakai, Hattar and D.I. Khan also included in it, he said.