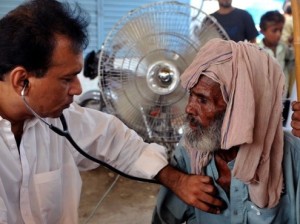 BANNU, July 4: The government of Khyber Pakhtunkhwa has decided to form specific teams of doctors and nurses in southern areas of the province for the displaced families of North Waziristan Agency.

The Provincial Minister for Health, Mr Shahram Tarakai, said the teams of nurses and doctors would provide medical assistance to the IDPs of North Waziristan, currently lodged in Bannu, Lakki Marwat, Karak and DI Khan districts for a month.

He added that after the completion of one month, new teams of medical experts would be sent to the areas.