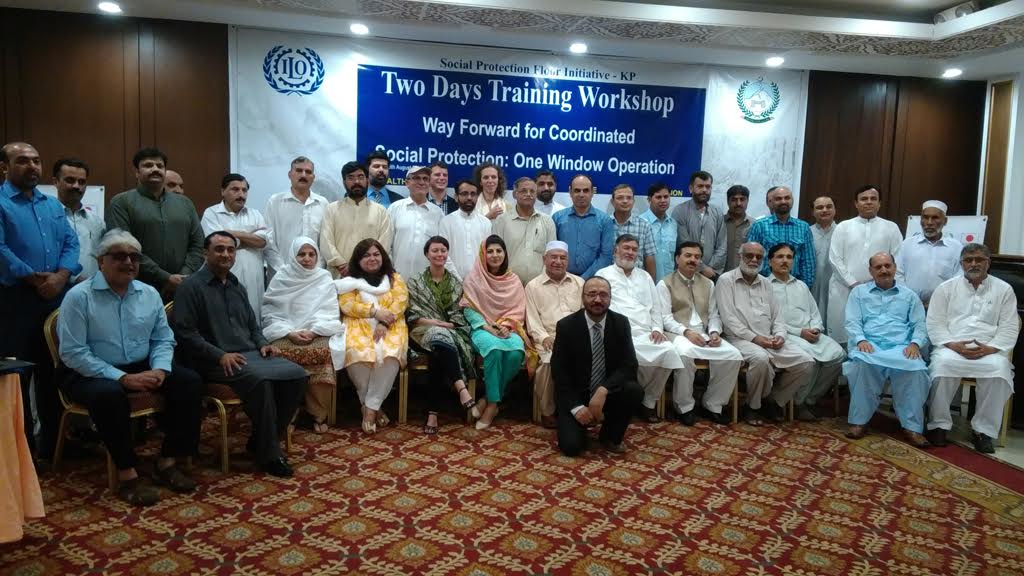 PESHAWAR, 10 August: In a two days Training Workshop held in Peshawar on 4 and 5 August 2016, the Director for the Special Development Unit (SDU), Planning & Development Department (P&DD), Khyber Pakhtunkhwa (KP), Mr. Muhammad Fakhr-e-Alam said that the Government of the province is committed to sustain and cooperate with all implementing and development partners in developing and reforming the social protection system in the Province.

The Director further shared that the province of KP is passing through a very critical juncture of its history. The issues of protracted emergency coupled with natural disasters have worsened the existing social protection situation. There is an increased rise in the vulnerabilities of the common people.

The Director said that KP is among the poorest provinces with poverty incidence of 41.3% against 26% at the national level. However, the KP Government is cognizant of its responsibility, and is fully committed to assist the poorest of the poor.

The participants were informed that the province has made substantial efforts towards a coordinated social service delivery system by adopting an updated and comprehensive planning document of the province i.e. the Integrated Development Strategy (2014-2018) with the objective to deliver the fundamental rights and privileges to its citizens with the following priority areas of  social services, education, health, livelihood, safe drinking water & sanitation, good governance, poverty reduction, employment, and skilled work force.

He appreciated the joint efforts of ILO and KP Government in devising the draft “Social Protection Policy” and the “Two Years Social Protection Strategy” for the years 2016-17. He also informed participants about the GIZ’s commitment to support four major components of the 2-Years Strategy.

Ms. Valerie Schmitt, Chief of Social Policy, Governance and Standards Branch, ILO Geneva, greeted the participants and said that social protection is a human right and it can become a reality for all. She said that member states of the ILO have adopted a Recommendation on social protection floors in June 2012.

Social protection including floors is also part of the sustainable development goals that have been adopted at the global level. Social protection is not new to Pakistan but many challenges remain such as gaps in coverage, overlaps and inefficiencies.

The need for joint efforts and involving all stakeholders including social partners at each stage of the design was also highlighted by her. She also mentioned that the Social Protection Floor Initiative in KP was initially funded by the Japan Social Safety Net that has come to an end in Jun, 2016.

She assured the Government of KP of the ILO’s continued technical support to implement Coordinated Social Protection System in the Province as part of ILO’s Global Flagship Programme on Building Social Protection Floors.

She emphasized the need for efforts to “leave no one behind” to ensure that social protection schemes are available and accessible to all people in the country and underlined the importance of continuous improvement of the existing social protection system..

Mr. Thibault Van Lange hove Social Protection Policy Officer-facilitator of the training- educated participants about the various designs of OWO currently being operated globally. The training workshop was successful to enable stakeholders not only to understand the mechanism of One Window Operation but also to contextualize the structure of the OWO design and redefining the stipulated roles & responsibilities through different group work activities and focused discussions. The workshop was also successful in developing a concrete road map for implementing OWO in the KP province.

SPFI-KP project was funded by the ‘Japan Fund for Building Social Safety Nets in Asia and the Pacific’ from 2013 till June 2016 with the objectives of institutional capacity development of key social security institutions; awareness raising on social protection floors; policy development and policy debate on Social Protection (SP); mapping of social protection programmes in the KP province; piloting district model under the draft policy in two selected districts of KP (Peshawar and Nowshera), and developing a video documentary for donors to generate synergies in continuing and sustaining support to the government of the province while scaling-up the social protection programs and projects.

Mr. Shah Rehman, Director General of the SDU/SPRU in his closing remarks informed participants about the significance of One Window Operation. He appreciated the efforts of ILO and his team in advancing further the design of OWO through mutual consultation and collaboration. He also thanked participants for their active participation and developing the road map for implementation of OWO.