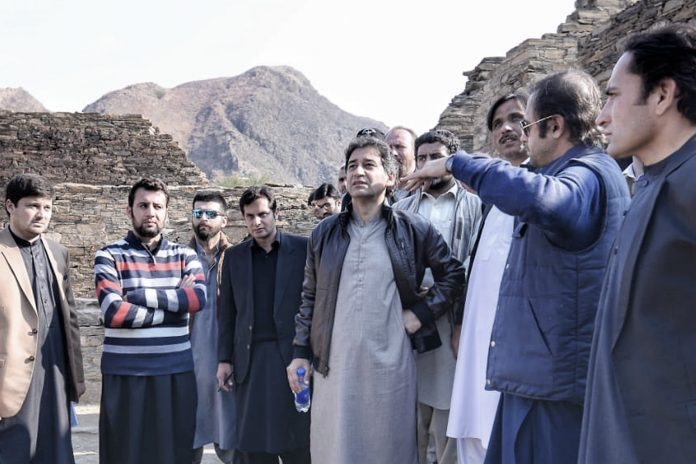 PESHAWAR: Senior Minister of Khyber Pakhtunkhawa for Culture, Tourism and Youth Affairs Atif Khan has said that three Buddha sites in the province will be turned into international destinations for tourists.

The provincial government of KP has announced preserving package for three sites namely Takht Bhai, Jamal Ghari and Shehbaz Ghari and installation of chairlift to facilitate the tourists, he said while visiting Takhtbhai archaeological sites on Thursday.

The provincial minister while on his visit to the Thakhtbhai Buddha sites on Thursday announced to reopen the thousand years old way to the sites from Seri-Bahlol village of the district Mardan as well as construct art gallery and cafeteria at Takht Bhai archaeological site.

“The UNESCO has bagged six archaeological sites as world heritage in Pakistan, in which Takht bhai is also among it. We will preserve the heritage for the generation to come”, Khan said.

The minister also visited Jamal ghari and Shahbaz ghari Buddha sites.  Atif Khan expressed that Chinese, Koreans and Japanese’s tourists are more interested in Archaeological sites of of Pakistan.”We are looking forward to the federal government to facilitate them and ease visa rules for those countries. We are also working with international communities to preserve Buddha sites and soon showcase our site to the world to attract more visitors to these sites.

According to wikipedia, Takht-i-Bahi is an Indo-Parthian archaeological site of an ancient Buddhist monastery in Mardan, Khyber-Pakhtunkhwa, Pakistan. The site is considered among the most imposing relics of Buddhism in all of Gandhara,[1] and has been “exceptionally well-preserved.”[1]

The Buddhist monastery was founded in the 1st century CE,[2] and was in use until the 7th century.[1] The complex is regarded by archaeologists as being particularly representative of the architecture of Buddhist monastic centers from its era.[3] Takht-i-Bahi was listed as a UNESCO World Heritage Site in 1980.

The ruins are located about 15 kilometers from Mardan in Pakistan‘s Khyber-Pakhtunkhwa Province.[2] A small fortified city, dating from the same era, sits nearby.[1]The ruins also sit near a modern village known by the same name.[5] It is located around 500 feet atop the small hill and around 2 km from village bazar.[4] The surrounding area is famous for sugar cane, wheat, maize, vegetable, and orchard cultivation.