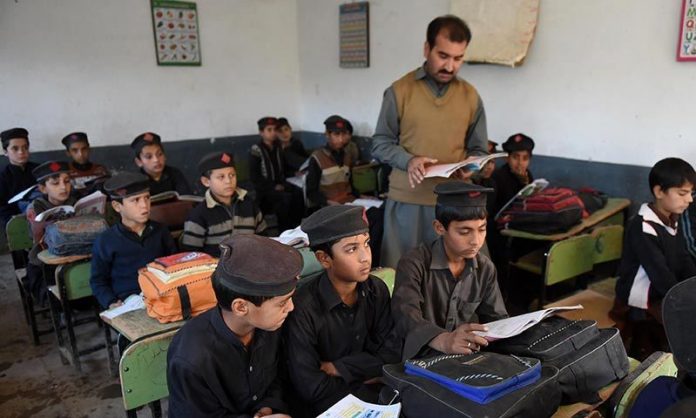 PESHAWAR: Khyber Pakhtunkhwa government has decided to recruit five thousand new teachers in the newly merged tribal districts but unlike the past, the qualifications have been reduced to Metric level.

Thus, under the new criteria for teachers in tribal districts, SSC and FA pass persons can also apply for the teacher posts. The purpose of this decision is to give priority to the local tribal people on jobs opportunities in their own areas; however, this will affect the quality of the teaching as there are already a lot of complaints that most the teachers are unable to teach the latest syllabus at schools.

The decision is taken by the Khyber Pakhtunkhwa Elementary and Secondary Education Department under which some 5000 new teachers will be hired in all the seven tribal districts which the government officials believe will revive the education institutions of the tribal belt.

While talking to media that the provincial adviser to the Chief Minister on Education Zia Ullah Khan Bangash said that the purpose of the step is to create job opportunities for the tribal youth of newly marked districts as well as stimulate the educational institutions that are negatively affected due to decades of neglect and militancy in the tribal belt.

Zia Ullah was of the view that the decision was taken keeping in view the education ratio in the tribal belt, which he says, is much lower than other parts of Khyber Pakhtunkhwa. Bangash said that with the recruitment of 5000 teachers the education institutions in the merged districts will be invigorated and tribal youth will get jobs in their own areas.