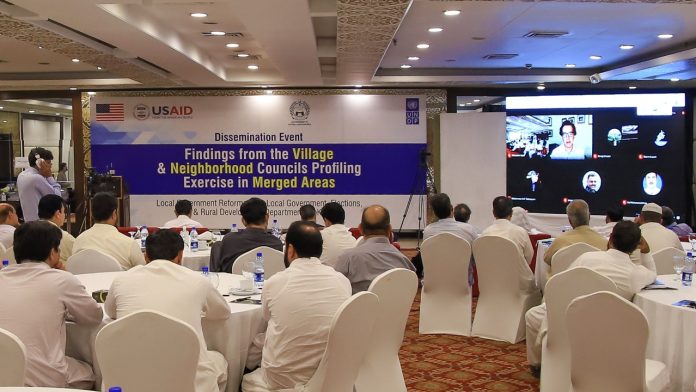 PESHAWAR: Khyber Pakhtunkhwa Special Secretary for Local Government Motasim Billah and the United States Agency for International Development (USAID) Deputy Mission Director Michael Nehrbass Thursday inaugurated the launch of a comprehensive study completed on the development needs and priorities of 702 village and neighborhood councils across the merged districts of KP.

The study, Profiling of Socio-economic Status and Development of Village Development Plans in the Village and Neighborhood Councils of the Merged Areas in Khyber Pakhtunkhwa, establishes socio-economic baselines at the village level. It provides guidelines for the formulation of local development plans within the merged tribal districts, says a press release.

MotasimBillah said, “The provincial government is focused on prioritizing the development needs of merged areas and the efforts invested by the Local Government Department in collaboration with the Planning and Development Department is commendable. I appreciate the assistance provided by the development partners, namely USAID and Unied Nations Developmet Program (UNDP) in the planning and implementation of the government’s initiatives for the uplift of these areas.”

He added, “USAID is committed to partner with the Government of Khyber Pakhtunkhwa in bringing the merged tribal districts up to speed with the other districts in the province.”

Skye Christensen, Chief Technical Specialist of United Nations Development Programme’s Merged Areas Governance Project, said, “Findings of the study are the outcome of detailed consultations with the communities in the merged tribal districts to identify their needs and priorities about public service delivery, which have been addressed within the socio-economic development plans.”