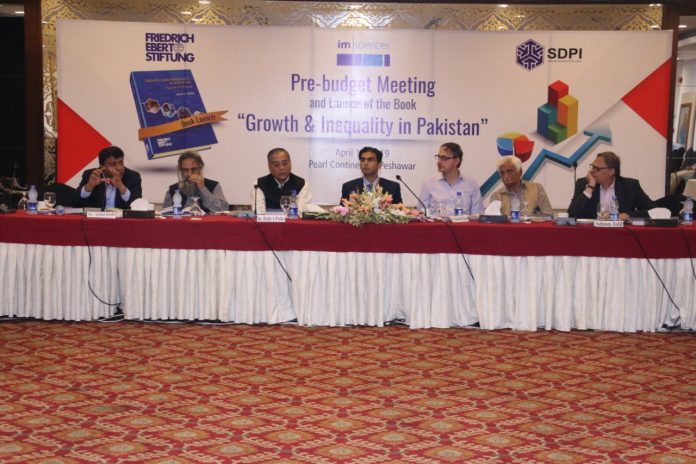 He stressed on specific allocations in the provincial development budgets for backward districts of South and North to overcome the challenges. He said that the idle youth is a big problem of KP government and the provincial scheme such as Insaaf Rozgar Scheme should have a central place for youth.

Expectations were increased among youth in the last elections when political leadership promised to create jobs, he added.

Joint Executive Director SDPI, Dr Vaqar Ahmed said it is important that Khyber Pakhtunkhwa government should utilize its large wealth in the informal sector and gradually provide confidence to the business community to come into the formal sector. He said that trade with Afghanistan including transit trade stands to benefit the provincial economy. Medical tourism also presents an opportunity, he added. He stressed the need for structural reforms that can increase bilateral economic relations with Afghanistan.

Abdul Qadir, Senior Advisor, Friedrich-Ebert-Stiftung (FES) said there is a need for a comprehensive debate on the budget formulation process in Pakistan, where economic discourse at the grass root level is still weak. He said our universities need to play a role in actively delivering new research to economic ministries and departments. In this regard, “Economy of Tomorrow” programme invites proposals from all stakeholders which can then be communicated to the federal and provincial governments, he added.

Dr M. Rafique from The Institute of Management Sciences, Peshawar said Rashakai Special Economic Zone has a potential to attract USD 1 billion of Foreign Direct Investment (FDI). He said to attract FDI there is a need to expedite the implementation of the provincial Industrial Policy.