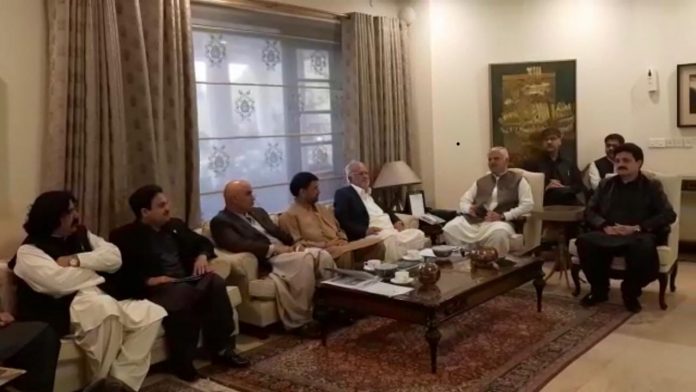 PESHAWAR: The advisory committee, comprising MNAs and Senators of all tribal districts, has decided the constitution of Jirga to negotiate with the Pakhtun Tahafuz Movement (PTM) to address to their apprehensions.

The first meeting of the committee was presided over by Chief Minister held here in the CM house on Monday. During the meeting, it was also decided to formulate subcommittees to discuss the developmental issues of every district with locals and present detailed reports to the advisory committee.

“All the members of the advisory committee will be the part of jirga to hold meetings with PTM leadership,” said the Ajmal Wazir, advisor to CM on districts while talking to media after the meeting. “We want to solve all the issues with the PTM through dialogues.”

Member National Assembly Mohsin Dawar told media that they have never refused to hold dialogues and jirga with the government. “Our struggle is based on the principle of non-violence and will ready to discuss all issues with the government.” However, he said that they will first discuss the matter with other members of the PTM.

Member National Assembly Ali Wazir, who is also a leading member of the PTM also expressed his willingness, if the jirga takes serious efforts in addressing their grievances. However, he added that they will never backtrack from their demands.

“The 10-year plan is expected to change the overall landscape of the merged areas,” said the chief Minister Mehmood Khan. He hoped that the sub-committee will visit their respective areas, firm up recommendations based on needs of merged districts and he assured that the provincial government would go all out to provide everything within its reach for the rapid facilitation of reconstruction and rehabilitation of merged areas.

The Prime Minister was committed to rehabilitation and reconstruction of merged areas and its people and he was constantly directing for the job creation and starting the economic and developmental activities in these areas. He assured to resolve the issue of the salary of Khasadar and levies and said that no Khasadar will be made jobless.

He was optimistic that the sub-committee of the advisory committee would work hard to focus on real issues of the tribal district and submit a comprehensive and detailed list of recommendations which the government would gradually resolve in order to fulfil the goals behind the successful merger of erstwhile FATA.