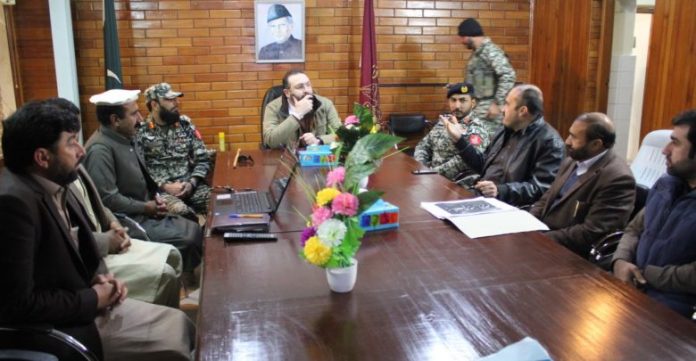 PESHAWAR: Khyber Pakhtunkhwa Minister for Health Dr Hisham Inamullah Khan during his visit to district Bajaur directed the  authorities concerned to take action against doctors and other health professionals who remain absent from duties.

He also announced the establishment of medical college and nursing college and to extend Independent Monitoring Unit (IMU) to the area, so as to strengthen the monitoring system.

Nawagai Anwar ul-Haq, Agency Surgeon Dr Wazir Khan Safi, MS DHQ Kar Dr Muhammad Noor and Dr Hameed-ur-Rahman. The Health Minister also visited District Headquarter Hospital Khar wherein Dr Muhammad Noor briefed him about the health facilities and told that the annual budget of DHQ Khar was Rs.19 million, which was not enough to meet the health requirements of the local population. He demanded an increase in the health budget.

Later, Addressing the local Jirga at Jirga Hall of Civil Colony Khar, which was also attended by the local elders, Dr Hisham assured that onwards no doctor will remain absent from the duty. The department, he said will have a strong check on all health professionals and in case of any negligence in the duty; action will be taken against them.

He said that all vacancies in the health department and hospitals will be filled on merit and they will not compromise on that. He said that steps will also be taken to curb financial irregularities and unlawful steps in the department and hospitals. The provincial minister maintained that without accountability and strict monitoring, the system cannot be improved; adding that the health department was focusing on the merged districts in particular.

He announced to extend IMU to the district Bajaur, so as to ensure availability of doctors and other health professionals in the hospitals. The department will also make efforts to commence work on the establishment of medical college and nursing college in the area. Dr Hisham also lauded the role and contribution of Pak Army in the maintenance of peace and development in the region.