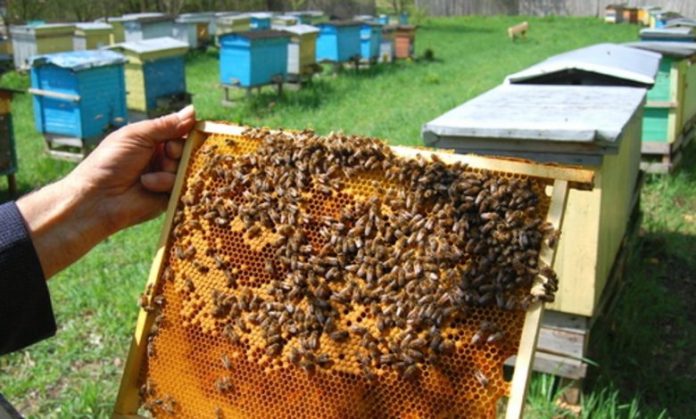 Gulab Shah, a beekeeper from Nowshera district was hopeful of getting plentiful honey yield earlier this summer. Shah, 28 had planned to use the proceeds of honey production to get married. However, torrential rains and resultant flooding on July 21 dealt a death blow to Shah’s dreams.

To protect bees from suffocating July heat, Shah had placed his about 200 beehives on a riverbank in Shinkiari area of Manshera district. Unfortunately, torrential rain on July 21 trigged flash floods which washed away Shah’s beehives.

The beekeeper losses amounted to Rs 1.4 million. Besides Shah, there were up to 3,000 beehives, belonging to other beekeepers, parked at the riverbank and raging torrents also washed them away.

Those 200 beehives were result of my eight years hard work, Shah told TNN. He said that he had planned to sell his honey produce and use the proceeds to get married and construct his own house.

Climate change is pushing beepers out of business

Climate change has greatly influenced the honey production in Pakistan in general and Khyber Pakhtunkhwa in particular. Experts estimate that honey production has dropped by nearly 35 per cent over past many years.

All Pakistan Beekeepers, Exporters and Honey Traders Association, an umbrella organization of dealers associated with honey trade, Pakistan’s honey production had reached 15,000 materic tonnes last year. However, the association has estimated that the production is likely to drop from last year’s figure.

Sheikh Gul Badshah, senior vice president of honey traders association, blamed the climate change as main culprit in drop in honey production. He said that last year, honey bees contracted some deadly virus. Due to the lockdown, pesticides could not be imported from China and large numbers of bees were killed.

Besides, heavy rains and floods have caused losses amounting to Rs 30 million on beekeepers this year. The losses have pushed many beekeepers to seriously considering quitting the honey business.

Pakistan stands on fifth spot in the list of countries most vulnerable to the climate change. Researchers have estimated the cost of climate change to Pakistan’s economy to be around US$ 6 billion a year.

Beside losses of human lives, agriculture and is said to be most affected sector due to climate change.

He said that extreme weather seriously impacted production capacity of honey bees. Dr Ali explained that honeybees cannot stand both the very high and cold temperatures. “Honeybees keep their colony temperature at 35 degree Celsius,” Dr Ali said. He said that if the mercury goes below 10 degree Celsius, bees rub their bodies with each other to push up the temperature. On the other hand, in high temperature, bees’ carry water to the colony and constantly flap their wings in it to bring down the temperature.

Dr Ali was of the view if bees remained too preoccupied with keeping temperature at optimum level, they would have little time for honey production. “It will also deteriorate their health and they would not be able to reproduce,” he said.

On the other hand, extreme weather also seriously impacts wild species of bees. He said that in the past there used to be 15 to 20 colonies of wild bees in a kilometers radius, which has now reduced to two to three due to extreme weather events.

Beri or sidr and palosa or acacia honey are said to best honey verities from Pakistan. But both species of trees have over the years faced ruthless chopping. Besides, during flowering months, extreme weather patterns like heavy rains, gusty winds and hailstorms destroy flowers and pollen, leaving little for bees to extract.

Dr Hussain said that sidr honey season used to last from August 14 to Oct 30. However, due to climate change jujube trees bear flower late, which has pushed up the season by a month. “Due to this mange to collect less food and time for production of honey,” he said.

Sher Zaman Mohmand, general secretary of beekeepers association said if weather was favorable, the country manages to produce up to 10,000 tonnes of honey in just one and half months. He said that KP contributes for about half of this or 5,000 metric tonnes.

Sidr or jujube honey production dropped by 50 per cent last year and the same trend was also visible during current year.

Mr Mohmand said that sidr honey prices have increased more than 100 per cent in the local market. Price of 40 kilograms of sidr honey has jumped to Rs 25,000 from Rs 12,000.

A few decades back, government used planes to spray mosquito repellent sprays on plants. Beekeepers took this issue to the court which stopped government from using planes for such sprays.

Though government no longer engages in such sprays; however, use of crop pesticides is proving deadly for bees.

Dr Ali said that climate change has also increased various crops diseases, which were leading to increased use of pesticides. “Farmers are now using more pesticides to protect their crops and this is proving fatal for bees,” Dr Ali said.

He said that booming population and human disregard for nature are also responsible less production of wild honey. “Now the wild bees have less space for their colonies due to expanding human settlements while on the other hand humans also attack beehives to extract honey,” he said.

Khyber Pakhtunkhwa honey industry started to flourish in 1980s, when the UNHCR provided trained the refugees in beekeeping. Since majority of refugees were living in KP; therefore, a honey market was established for them near Tarnab Farms.

Tarnab Farms, honey market has received international recognition and currently there are 1200 shops in it. Mr Mohmand said that most of Pakistani honey exports originate from this market. However, he said that due to declining production, the exports were also coming down.

Pakistan’s honey exports reached its peak in 2011, when the country exported around 26,000 metric tonnes of honey.

Mr Mohmand said that up to 700 containers of honey, each of them containing 18,000 to 20,000 kilograms, were exported in 2011. He said that Pakistan usually exports sidr and acacia honey to Saudi Arabia and Gulf countries.

Mr Mohmand said that due to quality standards, import of Pakistani honey is banned in the United States and Europe. According to traders, exports to Gulf countries were also on decline now.

Honey exporters data showed that last year only 180 containers were exported due to pandemic related restrictions. However, rains have dashed exporters’ hopes for plentiful exports this year. “We are likely to export 230 to 240 containers of honey this year,” Mr Mohmand said.

Mr Shah and his 20 associates petitioned government to compensate their losses. However, they did not receive a reply in two months.

However, PDMA said that they could not compensate the beekeepers for their losses.

The authority said that the losses of bee hives or boxes were not covered in the Relief Act, which covers the compensation for losses due to natural and manmade calamities.

The beekeepers and honey traders have always complained to the government that the sector is not being given industry status and efforts were not being made to reach the markets of the United States and Europe.

while Turkey stands second with 100,000 tonnes annual honey production. In 2011-12, Turkish beekeepers saw their yields plummeting due to climate change; however, government employed policies and strategies to counter the decline. These measures have resulted into increase in honey production.

KP government has decided to invest in the honey production sector and a project will be started in 10 districts on pilot basis.

Dr Muhammad Younas, project leader and senior researcher at Charsadda’s Entomology Research Center said the project was initiated on the order of Governor Shah Farman. He said that Governor Farman wanted to improve the quality of honey produced in the province.

“This initiative will benefit over 100,000 people besides paving the way for honey exports to the US and EU.

Dr Younas said that in first part of the strategy, a honey quality testing lab would be setup at Tarnab Farm. Besides helping locals differentiate between genuine or fake honey, it will also help produce honey that matches the US and EU specification for honey imports.

In the second phase, government will train beekeepers on bee relocation, improved techniques of care and replace outdated beehives with German and Turkish model hives.

Gul Badshah, vice president of beekeepers association said that Pakistan Peoples Party government acting on their advice planted jujube, acacia and other species fit for honey production on both sides of motorway.

However, on the other hand, current government did not consult them on the Billion Tree Tsunami programme. “Majority of the trees planted in the campaign have value for honey production,” Mr Badshah said.

He added that this shows government was not bothered about beekeeping and honey production.