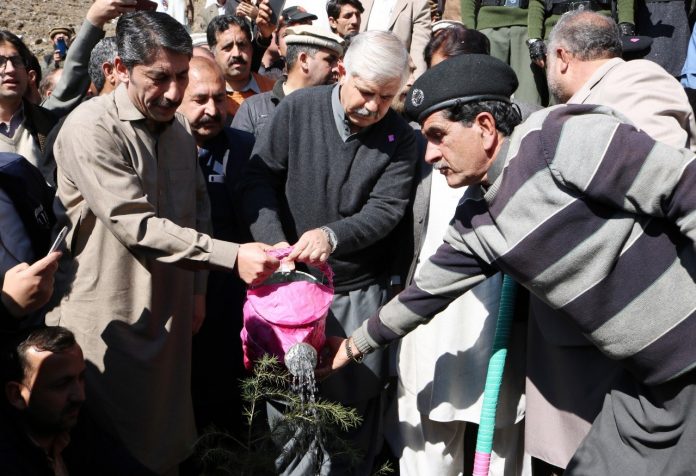 These views he expressed while addressing different events during his two-day visit to Swat. The Chief Minister planted a sapling to mark the spring tree plantation drive in the province. Later He inaugurated an irrigation channel projects costing Rs 92 crore that will irrigate thousands of acre land for the area to bring a vast stretch of barren land under cultivation.

Addressing these gatherings the CM called upon the people to be active participants in the drive for the green growth initiative which was not only in their interest but would be in the interest of coming generations. He appreciated the collective role of the forest department, irrigation department and the sensitivity of our people to this national cause.

The Chief Minister announced a timber depot in Matta and declared UC Matta Khareri and surrounding areas as the game reserve belt where hunting, permit and all activities would be regulated and there would be nothing for free. “The local will get employment through these initiatives and prosperity and development would come automatically in these areas,” Chief Minister said.

The Chief Minister recognizing the sacrifices of forest guards announced their up-gradation at the occasion adding that his government would encourage all government officials who deliver with the spirit of national zeal.

Mehmood Khan also talked about the promotion of tourism activities in the newly merged districts where mega tree plantation drivers would be carried out at mass scale level and similar arrangements and incentives would be extended to the people of merged areas on the pattern of other areas of the province.

Khan said that in the previous tenure the PTI government successfully completed the billion three tsunami with a cost of Rs 17 billion. Now the Prime Minister had initiated 10 billion trees in the country.