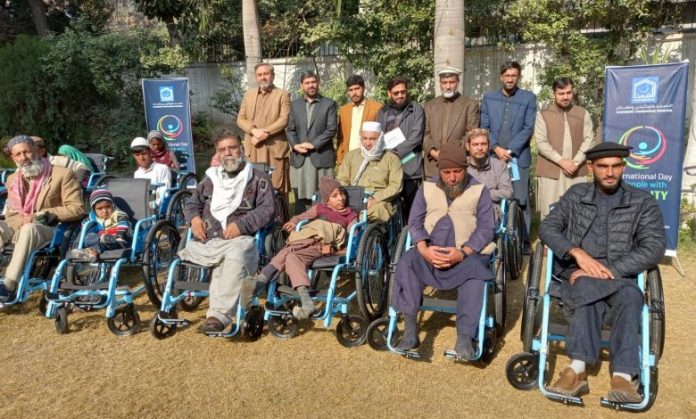 Disability rights organizations in Khyber Pakhtunkhwa have demanded the government to enact the proposed KP Empowerment of Persons with Disabilities Act.

They said that proposed law is pending since 2014. Besides, they also demanded for setting up the much delayed fund for their welfare at the social welfare department.

Persons with disabilities also threatened to take to the streets in case of further delay in legislation. Besides they also hinted at taking the issue to the Peshawar High Court.

They have made these demands on the occasion of International Day of Persons with Disabilities, which is observed on December 3.

The day is aimed at providing opportunities for persons with disabilities to enable them to participate fully in every aspect of life.

Pending legislation for welfare of persons with disabilities

Ihsanullah Duadzai is heading the Special Persons Development Association (SPDA), a non-governmental organization for welfare and development with persons with disabilities in KP.

Mr Duadzai told TNN that his one leg was crippled which caused him great deal of trouble.

He said KP government has failed to legislate for the welfare of people like him.

“Provincial government has failed to enact draft disability law, which is pending since 2014,” he said.

Mr Duadzai said that draft law has provision for four per cent quota in government jobs, making government buildings accessible for people with disabilities and provision of education.

KP minister for Law Fazal Shakoor Khan when approached for comments said that he was unaware about the long pending draft.

“I will check this with my department,” Mr Khan said.

However, the minister said that it was imperative to legislate for the welfare of persons with disabilities.

SPDA president Ihsanullah said number of persons with disabilities was higher in KP as compared to other provinces. “The reason for this lies in a decade long terrorism in the province,” he said.

Mr Duadzai said that social welfare department had in 2016 approved Rs 190 million for their welfare. However, he added that they have yet to receive this sum.

“We are tired of asking government for enactment of the draft law and now observing December 3 as protest,” he said.

He demanded that government should legislate on this subject; otherwise, they will be forced to protest and approach courts.

Issues faced by persons with disabilities

Sakina Afridi, a disabled person from Khyber district has lost one of her leg. She said that though women in this country were suffering due to traditions; however, for women with disabilities, situation was even worse.

She said women usually cannot venture out of their homes and it was even more difficult for disabled women like her.

“I face great trouble in going to government offices as I need help to climb stairs,” she said. She added usually males were around in such situation, which was problematic.

Sakina said that there were a large number of talented and educated women in their community. She said that these women with disabilities, if provided with facilities could not only live self sufficient lives but can also help their families.

Covid-19 and persons with disabilities

Covid-19 has further exacerbated issues of persons with disabilities.

The United Nations has also said that Covid-19 has deepened existing inequalities around the world.

Persons with disabilities in Pakistan

National Database and Registration Authority (NADRA) data showed that there were 371,833 people with disabilities in Pakistan.

Earlier this year, Supreme Court had directed the federal and provincial governments to take steps to empower special persons.

However, KP has failed to enact the law to empower the persons with disabilities so far.