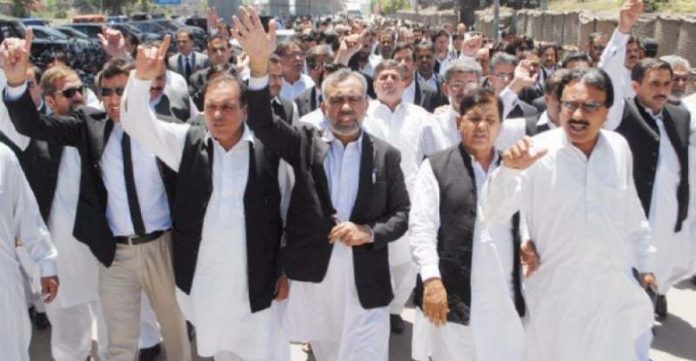 PESHAWAR: The Khyber Pakhtunkhwa Bar Council on Wednesday observed boycott of the court cases in protest against death of a college professor allegedly due to police torture in Loralai, Balochistan on 2 February.

Professor Ibrahim Arman Loni, who was associated with Pakhtun Tahaffuz Movement (PTM) and was a rights activist, allegedly died due to police torture after a protest demonstration. The death of Ibrahim Loni triggered protests in different parts of the country.

The lawyers in Khyber Pakhtunkhwa did not appear before the courts to pursue cases in protest against the death of Ibrahim Loni.

The district bar associations of Peshawar, Nowshera, Mardan and other area also observed strike and did not appear in courts. Due to strike of lawyers, the court proceedings could not move forward and litigants faced difficulties.

The KP Bar Council condemned the killing of Ibrahim Loni and termed it extrajudicial murder.

On Monday, a call attention notice was submitted in the KP Assembly seeking the House to discuss the ‘extrajudicial killing’ of Ibrahim Loni.

The call attention notice was submitted by Ahmad Kundi, a Member Provincial Assembly of Pakistan People’s Party (PPP) from Dera Ismail Khan, to discuss the ‘murder’ of the rights activist during a peaceful sit-in.

According to a notification, the session of the KP Assembly has been summoned today (Wednesday)..

Earlier, Balochistan’s home minister said while talking to media that according to initial investigation, Arman Loni died of a cardiac arrest. A doctor of District Headquarters Hospital also said that no signs of torture were found on the body.

However, eyewitnesses and leadership of the PTM alleged that a police officer struck Ibrahim Loni in the neck.

The Pakhtunkhwa Milli Awami Party (PkMAP) called the general strike after Arman was laid to rest in Qillah Saifullah on 4 February. Balochistan’s lawyers backed the call to protest the death of Ibrahim Loni.