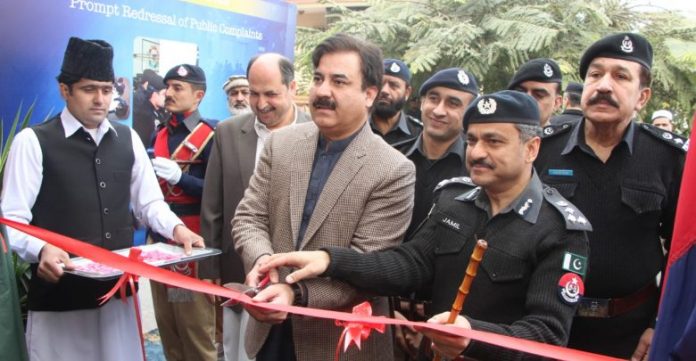 PESHAWAR: Khyber Pakhtunkhwa police has opened the ‘district police complaint office’ here at Mallik Saad Shaheed Police line on Saturday. While briefing the spokesperson for the KP government, Shaukat Yousazafzai, the Capital city police officer (CCPO), Qazi Jamil ur Rehman said that the complaint office has been opened to provide immediate relief to the public against their grievances against the police officials.

“This office will reduce the gap between the public and police force,” said Qazi Jamil while talking to the media. The police officer said that complaints cell is also connected through the latest technology and the public can any time register complaints against the police online.

It is pertinent to mention here that complaints offices have already been opened in the Chief Minister house, governor house, and even at Prime Minister House in Islamabad where the public can register the complaints against any government department. The KP police have also a complaints cell, However, the police officer said that the purpose of the new office is to convey the complaints against the police straight to the concerned officials without wasting of time. The office will receive complaints only against the Peshawar district Police. SSP level officer is appointed as its head who will be responsible to solve the public complaints within a short time.

Provincial minister for information Shaukat Yousafzai has appreciated the police department for opening the district complaints office in Peshawar. Yousafzai said that other government departments should also present itself for direct accountability and open such complaint offices.

In November 2014 the KP police have also opened an online complaint cell against police from any district of the province regarding registration of a genuine case, without writing any proper application and go through security barriers for submitting it to the police. The complainants have just need to send a short text message to the central police office and will get a response within 24 hours. The initiative was taken by the former inspector general of police Nasir Khan Durrani, who had personally monitored the facility to benefit the complainants.