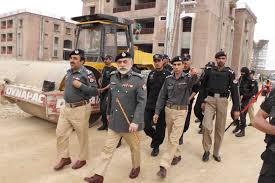 A handout issued here on Tuesday stated that another 6,600 guards are being trained who, after completion of their training, would be deputed at schools. After the tragic incident of Army Public School in which about 150 students were brutally killed, the government of Khyber Pakthunkhwa has made it mandatory upon all the schools to have security guards. The responsibility to train private guards is assigned to the Khyber Pakhtunkhwa police.