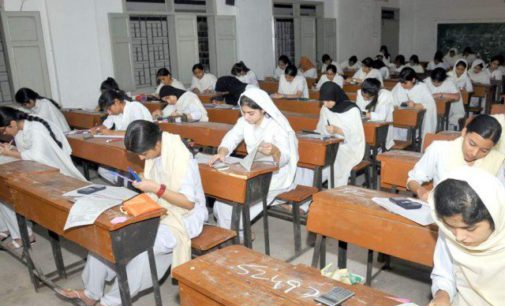 PESHAWAR: The federal and provincial governments have announced reopening of all schools immediately after improvement in the coronavirus situation and also issued the exams schedule.

The Khyber Pakhtunkhwa government has immediately issued dates for exams from first to eighth grade after reopening of schools which has served as a surprise for students who spent a lot of time at home due to schools closure and now they have been asked to appear in exams without preparations.

Being a mother of three children, I was also worried about this situation and went to school to know about it from the principal who told me that the government on June 16 ordered reopening of primary and middle schools from June 17 and then issued another notification the next day saying that the exams will be conducted from June 21-25 in compulsory subjects.

The school principal, Miss Rozeena, said about 600 students would attend the exam in her school, and it is very difficult to make arrangements for exam on such a short notice. She said the students did not study during the last year and now the teachers don’t know how to prepare papers for them.

Arfa, a seventh grade student, who had gone to Karachi during vacations, had to return immediately after reopening of her school in Peshawar. She said she is happy over improvement of corona situation after which at least she can go to her school. She said she will have to work hard to prepare for exam as now she has studied nothing.

Shehnaz, a headmistress of a government school, said students and teachers faced difficulties in coming back to schools which were reopened on a notice of just one day. She said she was also in Abbottabad, but rushed back to Peshawar she someone shared the notice of reopening of schools. She said one teacher of her school had gone to Dir and another to Chitral and they also rushed back immediately.

Shehnaz said the government should at least give three or four days for implementation of any notice, because immediate actions and reversal of actions bring discomfort and trouble for those who go to some far off areas.