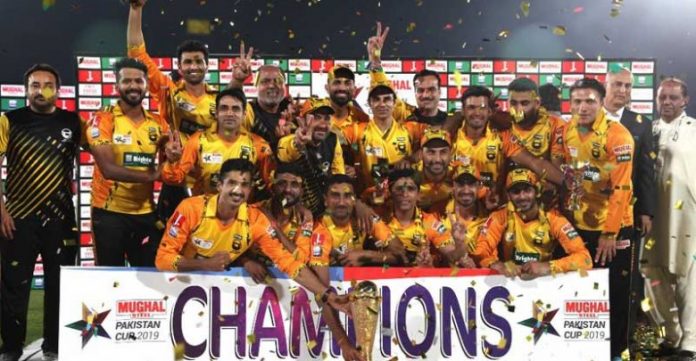 PESHAWAR: Khyber Pakhtunkhwa won the Pakistan Cup by defeating Balochistan by nine runs in the final of the mega event at Pindi Cricket Stadium on Friday night.

KP captain Salman decided to bat first after winning the toss and the team posted a formidable total of 307 runs for the loss of seven wickets. Opener Abid Ali, who scored a century on his ODI debut against Australia, also showed his mettle in domestic cricket and scored 132 runs in 119 balls. Muhammad Saad also supported him well with his 51 runs. Sohail Khan gave finishing touch to the KP inning in an aggressive style and scored 45 runs by facing just 20 balls.

Owais Zia scored a good inning of 83 runs and took his team near the victory, but other batsmen could not build on his hard work. They eventually fell short by just nine runs and could score 298 for the loss of nine wickets in the allotted 50 overs.

Sohail Khan was also good with his bowling by taking three wickets, although he went for plenty of runs (75), and was declared player of the match. Umaid Asif was quite economical with his bowling and also took two wickets.

Pakistan are expected to announce team for the upcoming World Cup in England next week. The performances in the Pakistan Cup will count for this purpose. Abid Ali’s century means he has emerged as a strong contender to be included in the team.

The team will leave for England on 23 April for a 83-day long tour during which they will play one T20 practice match, a T20 International, four 50-over warm-up matches and five ODIs before participating in the 46-day ICC World Cup from 30 May.

As per the ICC rules, all participating sides have to submit their 15-player World Cup squads by 30 April but can make changes until 22 May without needing the ICC’s approval.