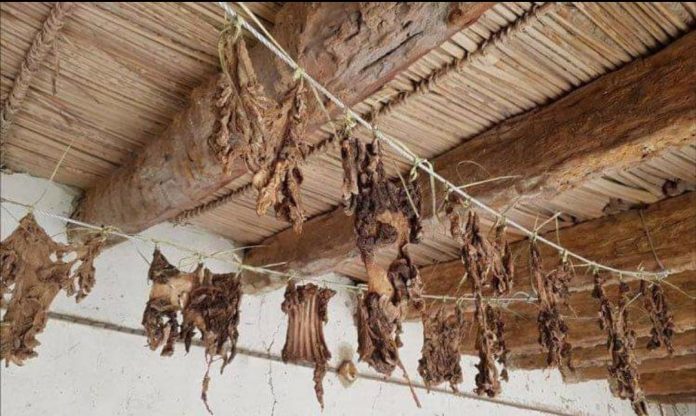 PESHAWAR: Landi is an important ingredient of cuisine of Pakhtuns who live in colder areas. It is very common in most areas of Afghanistan and Balochistan and some parts of merged tribal districts.

Pakhtuns living in warm areas have little knowledge about landi and most of them do not even know about it. Landi also known as dried meat which is a winter food popular among Pakhtuns mostly in mountainous areas where temperatures often remain on lower side. It is an ancient method of meat preservation.

In cold areas, the consumption of landi is common during the winter season. Landi is obtained from sheep which are grazed and specially fattened so that their flesh may be more suitable for the purpose.

The process of making landi is not so easy as it takes an expert to prepare it. It is usually prepared from lamb and sheep, although it can also be made from beef. Sheep which is grazed for landi is known as landi sheep.

First a lamb or sheep is slaughtered and then all the internal organs are removed in a skilful manner. Then wool is separated in a proper manner using boiled water. The process of removing the wool from skin is time consuming.

After that, the remaining hair on the skin are burned with fire. This process need an expert as the heat should not cook meat, but just melt the fat. The fat inside the sheep is melt a bit on the meat then the skin is rubbed by knives until a golden skin appears and the black burnt skin is removed.

The meat inside the skin pouch is cut into pieces and then it is left overnight in an airy place to prevent access of water. After that the meat is wiped to get rid of the carbon deposits. Then the meat is rubbed with salt to prevent bacteria. It is also rubbed with pungent-smelling asafoetida, which is like garlic and serves as a preservative, a much-needed additive in a part of the world where electricity and refrigerators are rare.

Having been thus prepared, the meat is strung on landi poles (tall poles with crosspieces which stand outside most Afghan mud-houses and serve as winter larders).

The meat is hung for minimum 15 days to maximum two months. The best time to prepare landi is December, when the meat dries out within 15 days if it is cold enough. It is commonly eaten in winter to keep the body warm. Salt is used to slow bacteria growth and give time for friendly, acid-producing bacteria to lower the food’s PH scale and inhibit the growth of dangerous bacteria for the long term.

Although this landi is nutritious but there are some health concern too. Landi sometimes produces worms inside it if it is not properly taken care of. This process isn’t failsafe, though, as many pathogens are salt tolerant, and cured meats may not take salt levels high enough to prevent bacteria growth. According to the National Centre for Home Food Preservation, dried hams are particularly at risk for trichinella, staphylococcus and mold.

Landi can be eaten raw. It has developed a very differently good taste when it is eaten as raw. The fat of landi is also eaten raw, but not as a proper meal. Raw landi is eaten just for taste.

Many dishes are made from landi and the most famous is landi rice which is widely known as Afghan jerkuy/landi rice.