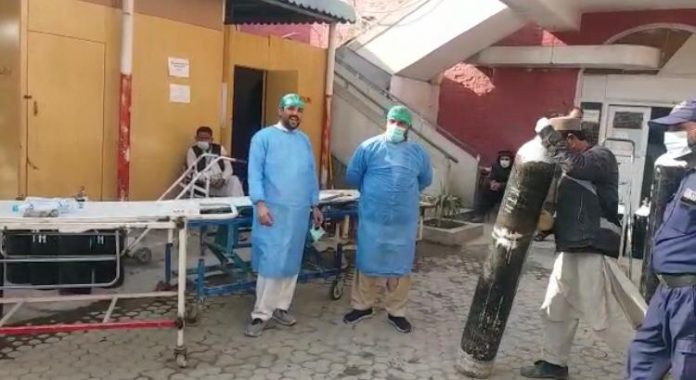 PESHAWAR: The oxygen supply in the isolation ward of the Khyber Teaching Hospital (KTH) was affected again on Tuesday which was resolved in time and no major loss happened.

Chairman Board of Governors Nadeem Khawar said the oxygen gas pressure was low, but no patient faced any serious problem. He said the chairman of the private oxygen supply company has been summoned today (Wednesday). He said the gas tank’s capacity will be increased to 10,000 cubic feet and oxygen pipelines will be changed in phases.

On Sunday, six coronavirus patients died at KTH due to oxygen shortage.

The Khyber Pakhtunkhwa government swung into action immediately after receiving sharp criticism from various quarters and suspended seven officials, including the director of the KTH Dr Tahir Nadeem Khan for negligence.

The report found that the rescue squad was incompetent to deal with any emergency situation within the hospital. Late Saturday night, when the incident happened, the duty staff of oxygen plant of the hospital was not present.

The probe committee found that the KTH oxygen tank has a storage capacity of 10,000 cubic metres, but there is no backup system for oxygen supply.