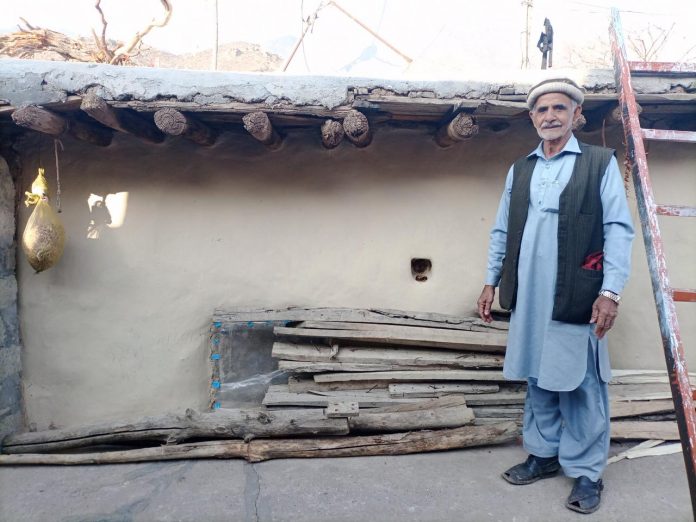 Kurram beekeepers are expecting their worst harvest in decades as untimely cold and wet weather due to climate change has prevented indigenous bees from producing honey.

Kurram beekeepers said that due to extensive use of ammunition and deforestation in the last decade, indigenous bees have migrated which has affected honey harvest and quality. The changing weather pattern and rapid urbanization have also affected the honey production in merged districts.

Mastu, 55, an Ali Sherzai tribesman from Central Kurram said that he hunts local wild honey at Spin Ghar or the White Mountain, which serves as natural frontier between Pakistan and Afghanistan.

“It is a difficult task to find wild honey in the mountain these days. Beekeeping business is on the decline,” Mastu said.

Mountains of Parachinar once provided a natural habitat for honey bees. The majority of people in Central Kurram were associated with the honey business.

Beekeepers like Matsu are worried; the once profitable business is in decline due to changing weather patterns and other associated factors

On the other hand, upper Kurram beekeepers are complaining that over past decade, the number of honeybees has been decreased in the mountains. However, they do not know the exact reasons for the decrease in honey bees’ population.

Amjad Hussain, in charge of the Parachinar Sericulture department said that they arrange training sessions for the local honey beekeepers. Data obtained under the KP Right to Information Act 2013, Kurram farmers annually produce at least 1,000 kilograms of honey and generate millions of rupees in revenue.

Honey production in merged district down by 40 per cent

On the other hand, All Pakistan Beekeeper Exporters and Honey Association have estimated a decline in the honey harvest in tribal districts up to 40 percent.

APBEHA senior vice President Sheikh Gul Bacha says 1.5 million families were associated with the honey business in Pakistan. It includes Honey beekeepers, shopkeepers, and exporters. “Due to deforestation in tribal districts, the majority of indigenous bees died from infections while those survived have migrated. Now the production of high-quality local honey has decreased,” he said.

APBEHA general secretary Sher Zaman said that the Hindukush range has been badly affected due to climate change and deforestation. “Over the last decade, Apis florla bees had migrated from the tribal districts, leading to reduction the honey harvest up to 40 percent,” he added.

Mr Zaman said that climate change and extensive use of pesticides sprays on crops were the two biggest threats to local bees.

Besides, he said that the pesticides, insects’ sprays and urbanization were the biggest emerging threats to the indigenous honeybees.

He said that many associated with indigenous beekeeping business were practicing wild hunting. “The standard practice is to keep half of the honey for the bee’s survival in extreme cold. If the hunter takes away all the honey, the honey bees will naturally die,” he said.

Mehboob Ali, 74, is associated with indigenous honeybee keeping. He has established natural habitat for bees at home. “The bees arrive in Kurram in April and stay in the mountains till October. Due to extreme cold weather in winter, the bees migrate to lower parts of KP and Punjab, which has affected our honey production,” he added.

On the other hand, federal government is working to launch the Billion Tree Honey initiative in the country. Under the project, the government would provide financial and technical support to beekeepers to expand their businesses.

Mr Bacha said that if the government wants to bring back local honey bees and attract more from neighboring countries, then they need to focus on reversing deforestation. “It is the only natural solution to increase honey production and for the restoration of biodiversity in the tribal districts,” he added.

The author is a radio producer. He tweets @daudpasaney