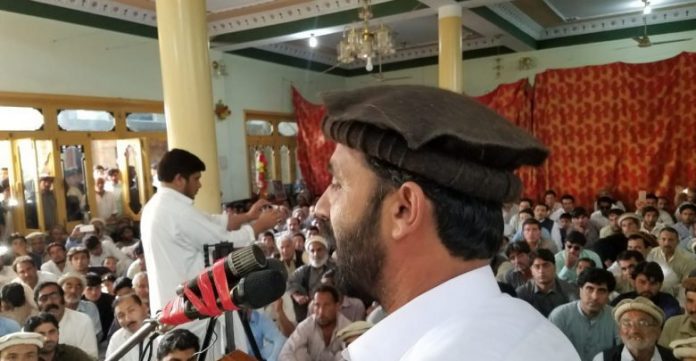 KURRAM: In Tribal district Kurram, 100 members Jirga has unanimously elected Inayat Hussain Tori to contest the election on PK-109 after which six election candidates have withdrawn their nomination papers.

There were a total of seven candidates contesting for one seat of Khyber Pakhtunkhwa assembly (PK-109). The tribal jirga was called to decide a candidate who is acceptable to all the people of the area before the July 20 polls.

The decision was made by the jirga through a secret voting system where each tribal elder polled a single vote in favour of a candidate. In the voting, Inayat Hussain Tori has secured 77 votes out of 100 and was unanimously elected to contest election without any opposition from other rival candidates.

The voting was conducted by the jirga on the condition that all the seven candidates will accept the decision and will withdraw their nomination papers in favour of candidate elected by the Jirga.

Now all the candidates will help in the election drive of Inayat Husain Tori to elect him to represent them in the provincial assembly and highlight the issues faced by the people of the area. After the decision of the Jirga, all other candidates have taken their nomination papers back from the Election Commission of Pakistan (ECP).

While taking to TNN Inayat Hussian Tori said that he will try his best to live up to the expectations of Tori and Bagash elders and solve the issues faced by the people of my area.

Tribal elder Haji Mamad Hussian, Haji Yousaf Husain, Haji Jalal Husain, Haji Zamin Ali, Muhammad Ali Shah, and other tribal elders while addressing the jirga has assured that they will not only vote him but will also help in running the election campaign.

In seven tribal districts, the election on 16 KP assembly seats is scheduled to be held on July 20.