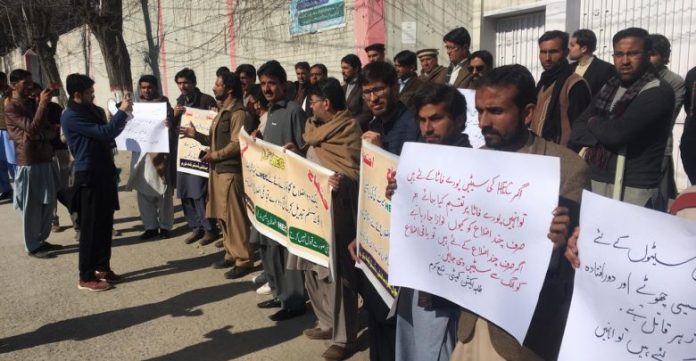 PARACHINAR: The Students Action Committee, parents and civil society activists staged a protest demonstration in Parachinar, Kurram tribal district, on Saturday against the new policy of the Higher Education Commission (HEC) for admission in medical colleges for students from merged districts.

The protesters said the HEC has introduced a new policy for admission in medical colleges according to which a combined merit list will be displayed for all tribal districts. They said the new policy will prove damaging to the students hailing from far off, less developed areas in merged districts and their chances of admission will further reduce. They demanded that the previous system of district-wise quota system must be restored.

The protesters who gathered outside Parachinar Press Club were holding banners and placards inscribed with slogans in favour of their demands.

Social activists Ahmed Hussain, Murtaza Hussain and students’ parents Gul Muhammad, Jamshed Hussain and others said the HEC has introduced a new admission policy to favour some selected tribal districts. They said the new policy will further reduce the chances of students from far off tribal districts like Kurram, Orakzai and North and South Waziristan to get admission in medical colleges.

The protesting students and their parents said the government had announced to double the admission quota for students from merged districts in medical colleges, but now a policy of combined merit list has been introduced by the HEC which will deprive the students from less developed districts even of their existing seats. They said if the HEC is serious in equal treatment of tribal districts, then admission quota must be distributed equally in each district.

The students, parents and civil society activists totally rejected the new admission policy of the HEC and demanded the HEC, education minister and minister for state and frontier regions to bring back the quota system. They said they will start a protest movement and also approach the court if their demand was not accepted.