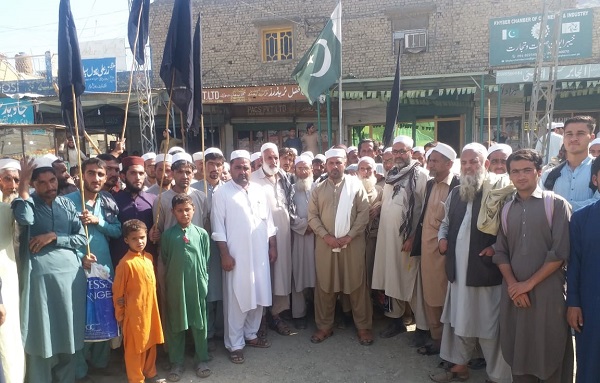 LANDIKOTAL: The labour union on Thursday staged a protest demonstration in Landikotal against strict attitude by the officials at the Pak-Afghan border in Torkham.

The protest was led by local labour union which was also attended by the youth union members. Torkham labour union president Israr Shinwari said that labourers working on Torkham border must not be harassed unnecessarily and they must be dealt with politely. He said hundreds of labourers were left jobless due to closure of the border for the last several months after the outbreak of coronavirus pandemic.

Israr Shinwari said now the government has reopened the border for four days a week for pedestrians after which the local labourers have again started finding work. He said the labourers had a very difficult time during the coronavirus lockdown and they lost their source of income and went into deep crisis. He said now the labourers have started finding work and they are trying to make up for the lost time by doing more work, but difficulties at the border are hindering them.

The labour union leader demanded the Frontier Corps (FC), Customs, National Logistics Cell (NLC) and officials of other institutions deputed at Torkham border to make special concession with labourers and facilitate them so that they could earn livelihood with dignity. He also demanded the government to facilitate the labourers in finding work.

Pakistan closed all the border crossings with Afghanistan, including Torkham border, in March due to the fears of spread of coronavirus. The borders were gradually reopened after four-month closure after successful talks between the two governments. However, some standard operating procedures (SOPs) were introduced and restrictions were made on the borders to keep out the threat of coronavirus. But these restrictions were also eased gradually.

On August 12, the government lifted the condition of change of drivers of vehicles transporting goods at Torkham border to further boost trade activities.

The transporters expressed happiness over relaxation of the condition. At a time when coronavirus was spreading rapidly in Pakistan, the government had imposed a condition of change of driver at the border as a precautionary measure. The drivers and transporters were facing difficulties due to this restriction.

The drivers and transporters hoped that the remaining issues at the border will also be resolved soon.