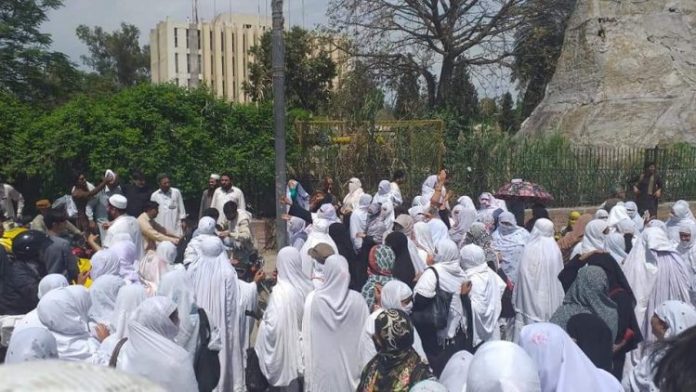 PESHAWAR: The lady health workers (LHWs) have staged a massive protest demonstration in favour of their demands outside the Khyber Pakhtunkhwa Assembly.

The protesting LHWs are demanding restoration of service structure, provision of health professional allowance and resolution of their upgradation and promotion issues. A large number of lady health workers from different parts of the province are participating in the protest. The protesters also blocked the main road for some time due to which the commuters faced hardships and traffic was jammed.

The LHWs said the provincial government of Pakistan Tehreek-e-Insaf (PTI) had made several assurances to them about restoration of their service structure, upgradation, promotion and providing other facilities, but no implementation was made. They said they are extremely concerned over their future due to the existing status of their jobs.

The LHWs said the salaries of the health workers have not been paid in many areas of KP for the last six months due to which they are facing many difficulties. The health workers warned that they will observe complete strike from their duties in hospitals if the provincial government failed to implement the orders of the Supreme Court of Pakistan regarding provision of facilities to the LHWs.

The massive protest by LHWs in Peshawar came two days after the lady health workers of Khyber tribal district staged protest against non-payment of their salaries.  The protesting health workers held a rally from Tehsil Headquarters Hospital to Jamrud Press Club and held a demonstration there.

The protesting women said their salaries have not been paid for the last four months, while the Health Department and Unicef have turned a blind eye towards the situation. They said their difficulties are increasing with the passage of time as they cannot pay the school fees of their children and other basic necessities at home. They said they raised the issue with concerned authorities several times, but no one resolved their problem, after which they were left with no option but to stage protest.

Few days ago, the LHWs of the whole Punjab province staged a long sit-in in Lahore to pursue their demands. The government finally formed a committee to look into their demands.