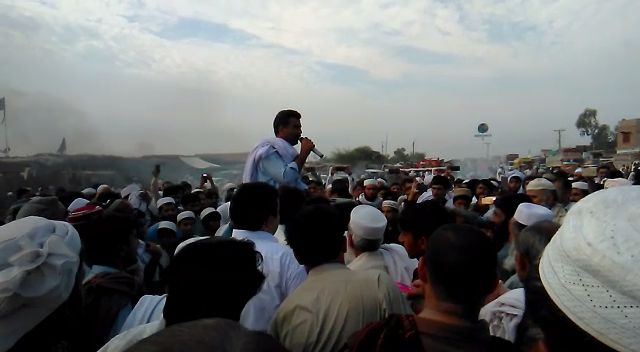 LAKKI MARWAT: People of Gundi Khan Khel have staged protest against the Police failure to recover a four-year-old boy who is missing for the last 15 days. The family has registered a case with police saying that 4-year-old Awais has been kidnapped for but police haven’t taken any solid efforts for recovery.

Early this morning, people of the area have announced through the speakers of the mosque asking the people to come out for the protest at Gundi Chowk. After the announcement, a huge number of protesters, including elders, children and women, gathered on the Indus highway, blocking the road for more than two hours.

They burned tyres on the road and chanted slogans against the KP police department alleging that police have failed to provide protection to lives and property of citizens. Due to the protest, a massive traffic jam was witnessed on both sides of the Indus Highway. The protesters have also stoned a police van due to which a policeman was injured after which huge contingent of KP police arrived the protest spot and assured them that all efforts will be made to recover the missing child.  But that the protesters were not ready to clear the road.

Lakki Marwat: The police have found bodies of two ‘wanted outlaws’ near Makanr drain in the limits of Parova Police Station. Police sources said that unidentified persons had shot dead Rahman and Jamil, residents of Lakki Marwat, and dumped the bullet-riddled bodies near Makar drain.

They said the slain persons were bothers and wanted to the police. They were hiding in the jurisdiction of Parova police after Lakki Marwat police declared them proclaimed offenders. The police started an investigation.