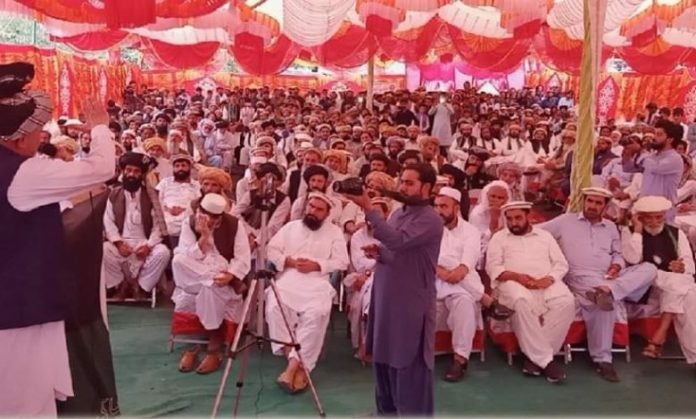 MIR ALI: Former member of the National Assembly Al-Haaj Shah Jee Gul Afridi has said the slogan of ‘Lar o Bar’ is damaging for Pakhtuns, and those raising this slogan are not sincere with Pakistan and Afghanistan.

Addressing a party meeting in Mir Ali, North Waziristan, Shah Jee Gul Afridi said he was invited by large parties to join them, but he decided to form his own political party to pursue a reforms agenda. He said his party, Tehreek-e-Islahat Pakistan, will be formally launched on August 14, 2021 at a huge public gathering in Islamabad. He said the new party will raise voice for the rights of people of merged districts and rest of the country. He said he was confident that the ideology of the party would get great support among the masses.

He said his party staged a sit-in outside the Parliament House for rights of people of merged districts, and a petition has also been filed in the Peshawar High Court (PHC) in which the Centre and three provinces have been made party. He said his party MPAs are also raising voice for people’s rights from the floor of KP Assembly. He said his party will serve the people from Chitral to Karachi.

Shah Jee expressed grave concern over law and order situation in neighbouring Afghanistan and said peace in Pakistan is not possible without peace in Afghanistan. He vowed to send the proponents of ‘Lar o Bar’ packing. He said the people of merged tribal districts have totally rejected this controversial slogan.

He said the merged districts must get share in NFC Award and local government polls must also be held without further delay.